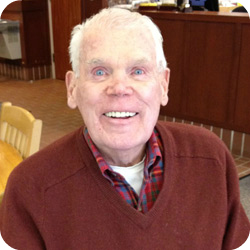 When Tim Harvey joined the Rye YMCA at the age of six in 1933, the entire staff could be counted on both hands.

“It’s really amazing to see how many functions go on at the Y now,” Harvey marveled in a recent conversation with a Rye Y staffperson.  “Back then, there was the director Pa Cope; his secretary Minnie Loescher; Mr. Oster, who ran the gym; Mr. Murphy, who was in charge of the under 16 guys; Jimmy Ryan, the maintenance man; and ‘Pop’ Sibley,” who held the all important role of stocking the nickel coke machine.

Born in Darien, CT into a family with deep roots in Rye, Harvey moved back to Rye when he was four.  During the Depression years, the Y was a “very eclectic mix of kids,” Harvey recalled with a clarity that melted away the decades. “It was much more neighborhood-oriented in those days.  Families had one car and the dad took that to work.  So kids walked, biked or took the bus to the Y.  The bus was just .15 a ride.”

“Basketball wasn’t big then, but they had games and gymnastics. I was the smallest guy so I was always at the top of the pyramid,” Harvey said.  Nor was there a pool, but Pa Cope would arrange basketball games at the Greenwich or New York City Y, which did have pools.  Harvey remembers taking the train into Manhattan in his early teens, where the Rye Y boys would play basketball, swim and take in a movie.

During the school year, Harvey and his siblings—two sisters and a brother—attended Rye Grammar School and later Rye High School.  But summer–a time for watermelon, hot dog and marshmallow eating contests and arts and crafts—was spent at Rye Rec.  “Rye Rec started on the Y property and was very active in the summer,” Harvey noted.  In the late 1930’s and early 1940’s, we would play baseball in the morning and go on bicycles to Rye Beach in the afternoons.”

From the age of seven through nine, Harvey spent two weeks each summer at the Y’s upstate residential camp, Camp Mohican.  “The campers were from all over.  As I remember, it was $10 a week. Pa Cope was a fabulous storyteller. Ghost stories after the sun went down was his specialty,”

While Harvey’s involvement in the Y waned during his high school and college years—he was busy with academics and sports—he remembers helping Pa Cope move Camp Mohican from Black Mountain to Gull Bay and working as a Junior Counselor. “All of the adult males had left for the service, so Pa had to rely on 16-year old kids in responsible positions.”

Although it has been roughly 70 years since Pa Cope served as a role model for Rye’s boys, men of a certain age still remember him vividly.  “He taught Sunday school at the Episcopal Church,” Harvey remarked. “He was a machine gunner in the English Army from 1914-1918.  He never got a scratch.  Then, he left the country when the war was over.  Pa was very interested in keeping the 16-21 year olds out of trouble.  He was well connected with all the businesses in town—the Y hosted regular Lions Club lunches—and used his connections to find jobs for young men. Many of the jobs were at Bullard’s Machine Tool Company in Bridgeport, CT.”

Harvey also remembers Joe O’Brien, a popular older boy who helped Pa Cope with anything that needed doing and later became the Rye Y’s Athletic Director.  “Joe was a clean-cut, all American guy.  He was a mentor to me when I was twelve to fourteen years old.”

Over the next several decades, Harvey’s stint in the Navy, followed by college (Yale University, Class of 1950) and a successful career in industrial administration took him all over the world.  During that time, he joined eight or nine Y’s in several locations, including Guelph, Ontario, where he lived for 13 years.

In 1954, Harvey married his first wife and had two children, who now live in Colorado Springs. He married his second wife, an Australian, in Rye but they divorced when she returned to her home country. Although Harvey had worked in Australia from 1969-1971, the couple “agreed to disagree,” on a place to live.  “She went back to Australia and I stayed here,” Harvey commented cheerfully.

Then, in 1999, Harvey re-connected with Jean McMath at a memorial service for her sister.  The pair had met in seventh grade when Harvey hit her in the back of the head with a snowball. “She squealed to the principal and that’s how we met!”  Jean and Tim married in 2001 and remained together until Jean’s death in March 2011.  Around that time, Harvey returned to Rye after living in Greenwich, CT.

“In the middle of that,” he continued, “I got sick with pneumonia and the flu.  My doctor recommended pulmonary rehab at Greenwich Hospital.  I started exercising consistently.  I lost 40 pounds.  I went through the YMCA’s Diabetes Prevention Program.  Now I come into the Y three times a week.  I do fitness training with Laura.  I take the Tai Chi class.  And in between, I walk up and down the street or at Playland.”

“It absolutely amazes me the number of people who come through that door, the number of programs and activities,” Harvey concluded.  “I’m sure Pa Cope is looking down and wondering how you do it all.”