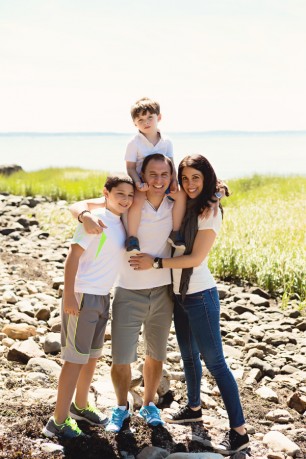 By Denise Woodin, Director of Community Impact and Social Responsibility (Appeared in the Rye Record September 25, 2015)

When Wendy Baruchowitz moved to Rye in 2010, after stints in Manhattan and Hoboken, her future seemed bright. Married to Mitch, an investment banker slash lawyer and mother to five-year old Braden, Wendy was working at an ad agency and just settling into her new home when she became pregnant with her second son, Blake.

But from the beginning, the pregnancy felt off. “I didn’t feel right,” Wendy recalled during a recent conversation at the Rye Y. When she started having early contractions at 15 weeks, her doctor ordered her to bed for the duration of the pregnancy.

Wendy obeyed, until she couldn’t any longer. One week before her delivery date, she stood up. All of her muscles had atrophied. Even more alarming, her heart rate shot up. She felt her blood pool down to the baby and to her feet. She was so light-headed she had to sit down again. When the symptoms didn’t go away, Wendy turned to the internet and found POTS (Postural Orthostatic Tachycardia Syndrome), a disorder of the body’s autonomic system. With POTS, functions that most people take for granted—the steady rhythm of the heart pumping blood, the flow of air in and out of lungs, the body’s ability to stay cool or warm—become de-regulated, off on their own agendas.

“I knew something was wrong,” Wendy said. “I kept telling my family, I kept telling my obstetrician ‘I think I have POTS.’ I went to my internist. And they all said ‘no’. They didn’t know what POTS was. Everyone said ‘you’re pregnant. Everything will resolve once you have the baby.”
In June 2011, Wendy gave birth to a healthy boy: Blake. And her health went from bad to worse. “I literally became debilitated overnight,” Wendy remembered. “My heart rate, just from moving, would go up to 150-160. I couldn’t sleep. I was incontinent. I was spontaneously vomiting. I was crawling instead of walking because every time I tried to stand up, I felt dizzy.” Wendy paused. “And I had a newborn who I couldn’t hold.”

“I was freaking out,” she continued. Wendy began making the rounds—to cardiologists, neurologists, psychiatrists. No-one had heard of POTS, and those doctors who researched it told her that it was more common in teenagers due to their changing hormones. She was told it was post-partum and that it would pass. She was given anti-anxiety medications. “I was made to feel like I was crazy.” And each day, just getting out of bed, changing Blake’s diaper, showering, even swallowing food, became increasingly difficult.
“It was the worst time of my life,” Wendy recalled. “I was all alone. Everyone, even friends and family, was saying that I was crazy. And I was post-partum. Not necessarily post-partum depressed, but depressed because I didn’t know what was happening to my life. I didn’t know how I was going to live.”

Mitch was supportive, but conflicted. The doctors were saying one thing and his wife another. He was scared for Wendy and as supportive as he could be, but he had to return to work. “I think for a while he was in denial and couldn’t grasp what was happening because none of the doctors were validating it,” Wendy reflected.

In September 2011, Wendy finally found the answers she was looking for when a cardiologist in New Jersey diagnosed her with POTS. And he gave her advice that would start to turn her life around. “Exercise like you’ve never exercised before,” Wendy recounted his words, “drink as much fluid as you can during the day and increase your salt intake.” He recommended that she start in the pool.

“I was one of those people who would sit on the couch and eat and entire box of chocolate chip cookies” Wendy admitted. “Before I had Blake, I never exercised.” So she joined the Rye Y and started swimming. At first, she could barely complete one lap. And the logistics of her new regimen were daunting. “Getting dressed, getting myself downstairs, into the car, parking, walking from the car to the entrance to the locker room, getting into the pool, showering afterward… by the time I got home, I was already back in bed.”

She went every day. In rain, snow, on weekends and holidays. On the rare times the Y was closed, Wendy swam at New York Sports Club. On Christmas, she called the Marriot in Port Chester and told their staff that she had a medical condition and needed to swim. They let her use the hotel pool. Wendy started working with Y swim instructor Sheila Viger, who attended a seminar to learn about the best exercise for people with heart conditions. After three years, Wendy had worked up to 30 minutes in the water.

But she still couldn’t stand for long. Then Wendy learned about a Toledo-based POTS specialist, reputedly the top in his field. She added her name to the doctor’s year-long waiting list and in October 2013, Wendy and her mother-in-law finally boarded a plane for Ohio. Although the flight was “mind-boggling hard,” the trip “changed everything.”

“He told me about different medications,” Wendy reported. “He said that swimming is great, but I also needed to do more cardiovascular and more orthostatic, or upright, exercise.” When she returned to the Y, Wendy walked into the fitness center. “I was so intimidated. I told Laura Laura, [the Y’s Member Wellness Coordinator] ‘I have this medical condition. I might pass out. Can you just watch me on the treadmill?’” She walked for 1 minute and called it a day.

Today, Wendy runs two miles for 30 minutes. She works out with Rye Y trainer Peter Lopez. On her off days, she takes Yoga classes, bikes and walks five miles a day. “I started to train my autonomic system to pump blood back up to my heart,” she explained.

“Exercise gave me my life back,” Wendy stated. “I’m not saying that I’m 100% perfect and I’m fine. I still have my bad days.” However, her new routines have transformed her from a person who crawled around her house to a “person who is functioning like a normal person.”

“And it’s because of this place and this exercise and the support that the Y has given me,” she continued. “Every single person I’ve come in contact with has only wanted to reach out and help. I’ve had opportunities to join other gyms, but I won’t. From the second I walk in the door…just the greetings and the love and the support in this place…I’ll never leave this place, ever.”

When Wendy first told her story to the Y staff, she held her struggles close, choosing to remain fairly private. “I didn’t want people to feel sorry for me,” she noted. “I didn’t want to be viewed as this sick, pathetic person.” Wendy also wanted to protect her children from the harsh realities of POTS. “In the beginning, I tried to hide it from Braden, my older son. Slowly, I started to talk to him. I wanted to show him that you can have a disability and fight and have a happy life.”

As she continues her journey to recovery, Wendy has become more outspoken about her experience and about POTS. “I feel lucky that I’m in a position to speak out and spread this important word to the medical community to make them more educated about this illness so people don’t have to walk around feeling crazy and so sick,” she observed. “Over one million people in the United States are known to have POTS. It’s more common than Parkinson’s or M.S. And if the doctors would just take the time to listen; no-one knows their body better than themselves.”

This fall, Wendy is busy organizing a one-mile walk and run to benefit Dysautonomia International, a non-profit organization working to find a cure for POTS and other autonomic disorders. “My goal is to spread awareness about this syndrome and that it can be o-k. There are some people who are too sick to exercise. I feel that I’m one of the lucky ones.”

The POTS Take a Stand Walk/Run will be held on Sunday, October 4 at 9:30 a.m. It will start and end at Rye Recreation. For more information, visit http://www.potstakeastand.com.