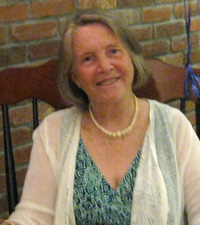 By Denise Woodin, Director of Community Impact and Social Responsibility
Published in the Rye Record, September 9, 2016

Sally Wright arrived in Rye from Chicago in 1979, leaving behind a career as an Equity Trader and looking forward to three years on the East coast. Thirty-seven years later, she has packed her bags once again and is returning to her home state of Michigan. During the intervening years, Sally raised three children, lived in two houses, divorced, started a new career as the Rye YMCA’s Development Director, and left an indelible mark on downtown Rye.  With her long-awaited retirement looming—her last day of work is August 26—Sally reflected on her unexpected life in Rye and the changes she seen at the Rye Y.

Attracted to Rye for its good schools and proximity to Long Island Sound, Sally and her family settled into a house on Milton Point. They had toured three states searching for a home, but Sally fell in love with Rye. “I had lived on the water in Michigan and after looking at several other towns, I realized how much it meant to me to live on the water,” she explained.

Sally’s son Chris was born in 1979, followed by Amy in 1982 and P.J. in 1991 and before long, she found herself immersed in the world of PTO activities. The PTO, at Milton School and later at Rye Middle and High Schools, would be her bridge to the Rye Y. “We were good friends with our neighbors, who had kids the same age as ours,” Sally recalled. “They saw me doing the PTO work and they knew I was looking for a part-time job. They decided that I would be a good fit for the Y.”

Sally had set foot in the Y only once, when she inquired about a gymnastics program for Chris. And she knew nothing about the organization. Nevertheless, when her neighbor, Rye Y board president Nancy Haneman, asked her in 1993 to work on an endowment campaign with Y volunteer Harry Broom, Sally dove in. She found that her business skills and her experience working with the schools served her well. “It’s all about building relationships and asking people for money,” she observed. “So I was pretty well versed in that by the time I got here.”

Three years later, the Y’s executive director Pat Morrissey hired Sally as the organization’s full-time development director. While happy to land a new job, Sally ran into a few challenges during the first several months. Five months after she started, Morrissey resigned. His departure was followed by the resignation of the Y’s head of administration, Stephanie Lord, who had served as mentor to Sally. “I wasn’t sure what I had gotten myself into. It was a rough start. But the happy side was, the board found Gregg Howells, and he became my new boss. And then everything was just hunky dory after that,” she laughed.

In the beginning, Sally juggled fundraising, marketing, communications and administrative duties. “I was a one-man shop,” she said.  And then there was the learning curve for professional fundraising. “I had so much to learn. But I was lucky enough to be sent off to development presentations and conferences and I joined A.D.O. (Association of Development Professionals). And the Y is such a great organization because you meet development directors from other Ys. They shared their experiences and helped me feel more comfortable in doing my job.”

The biggest challenge, and one of the most exciting phases of Sally’s career came after the board approved a multi-million dollar facility expansion in the late 1990s. “I’m proud of the fact that, although they hired a development director for the capital campaign, she left after two years and then I had to step into the breach and finish the job with Gregg,” Sally recalled. The fact that we raised $5 million to add to the $4 million bank loan was a real feat. It was a team of people, it wasn’t me, by any means. It was the board members who were so dedicated.”

“They say, ‘if you build it, they will come’” she continued. “Well, they sure did. The Y boomed after the expansion. It was a cute little place before and it was a nice asset to the community. But once we were able to build it into a real Y, functioning with two pools and a huge gym, it was just amazing. It was a very exciting time.”

And then came the flood of 2007.  During spring storms that dumped record levels of rain on the region, Blind Brook surged over its banks, inundating the Y’s parking lot and lobby. The first floor of the relatively new lobby was devastated. But the silver lining, “the rewarding thing,” Sally noted, was that “the community responded so amazingly. We raised almost $200,000 within a couple weeks. We had an emergency meeting with the board and trustees and we decided to go ahead with the Rye Derby even though we couldn’t even go into the building.” It was important, Sally explained, to “show the community that we were resilient and that we could come back from a hardship and that we were here for them. And they were here for us.”

As much as she is identified with the Y, Sally is also known for her efforts on behalf of Rye’s business community. Following her boss’s lead—Howells is an active member of the Rye Rotary Club—she joined the Chamber of Commerce. “Gregg set the example of volunteer work and that the Y is a community organization. I decided that since I live in Rye and I care about downtown, the Chamber was the most worthwhile cause for me to be involved with.”  Fifteen years ago, the Chamber was “struggling to reinvent itself,” Sally remarked. But under the leadership of Catherine Parker and Jim Sullivan, and with Sally’s help, the organization began to thrive. She later became an officer and then president and was instrumental in bringing Mistletoe Magic and the Farmer’s Market to Rye, two of her proudest achievements.

Asked what she will miss most about the Y, Sally quickly replied “The people. The folks I have worked with year after year. Gregg has been an amazing boss. He gives his heart and soul to the Y. And we know he doesn’t sleep at night. He’s always thinking about the Y… The Y has been a Godsend to me in my personal life, helping me get through obstacles. Having the Y there to help and support me has been huge.”

Howells is equally effusive about Sally, stating “above and beyond the dollars she’s raised, Sally has always been the quintessential team player helping out wherever she can. She has been a true ambassador for the Rye Y for over 20 years. She’ll be greatly missed!”

As for the City of Rye, Sally reflected “I’m going to miss the Chamber work, and downtown and all the activities and special events. I have friends here, but the community as a whole is so great—the schools, the police, the teachers. It’s a small town, everybody knows everybody. I like that. My kids used to call me the ‘Mayor of Rye’. But when you live in a small town that long, you do get to know a lot of people. So, I’ll miss that. I’m sure I’ll meet new people where I’m going. I’ll just have to work at it.”