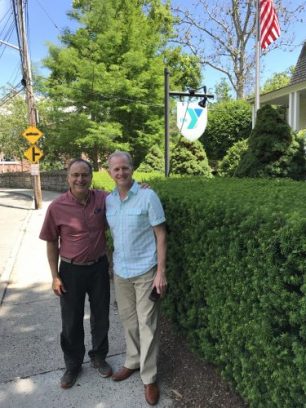 Fifty years after its final season, Camp Mohican still evokes a powerful nostalgia in the men who came of age at the rugged all-boys camp in the Adirondacks. Owned by the Rye YMCA from approximately 1953 until 1969, Camp Mohican lay at the end of a five-mile dirt road on the forested banks of Lake George. The wooden cabins were unheated and uninsulated. The boys would bathe in large wash basins with cold water that was pumped directly from the lake. The hikes and canoe trips were often grueling, multi-day adventures. Timber rattlers would sometimes slink into camp, only to be shot by Tex Kelly, the camp’s hiking director.

And 11-year old Jim Gedney loved it all.

“It was the first time I really felt a part of a community and a group,” he reflected during a recent conversation at the Rye Y. “I didn’t have that same feeling in school in Rye, even though I had friends and was involved in activities.”

Born in Port Chester’s United Hospital in 1952, Jim and his two siblings were raised mostly in Rye. The Gedneys were among the earliest settlers in the Sound Shore area, going back to 1699 when Jim’s ancestor Eleazar Gedney landed in Mamaroneck and married the daughter of that town’s founder. His maternal grandfather, John Kelly, was born on the former Parson estate, now the grounds of Rye High School.

When Jim arrived at Camp Mohican in 1964, his only experience with being away from home had been the occasional sleep-over. “It was kind of a sink or swim,” he recalled. “Either you were going to be engaged with it, love it, or not.” At the end of four weeks, he didn’t want to leave. Forced to join his family for their annual Adirondack camping trip, he was miserable. “I pouted the whole time,” he admitted. “I wanted to go back to camp. So my parents got on the phone with the camp director who said ‘yeah, bring him back!’” Jim finished the summer at Camp Mohican and never spent less than the whole season there again.

“The camp was mainly organized around a wilderness, hiking and camping program,” he explained. Every Monday, after breakfast in the big dining hall, the campers would meet their counselors outside, ready their gear, and head out, sometimes hiking, sometimes paddling old aluminum canoes or rowboats. The older boys might be gone for four or five days, sleeping on islands in the middle of Lake George or in the backcountry of the High Peaks.

“It was tough!” Jim conceded. By the end of his first summer, he had climbed 15 of the Adirondack High Peaks–mountains that soared 4,000 feet or higher. Encouraged by Tex Kelly, Jim set the goal of becoming a “Forty-Sixer”, determined to join a club whose members have climbed 46 of the High Peaks. On August 21, 1966, at just 13 years old, Jim, Ricky Frank–an 11-year-old camper also from Rye–and 19-year-old counselor Dave Harvey, reached the summit of Allen Mountain and achieved their goal.

Three years later, Jim found himself leading groups of boys up the same mountains. “Because I was a Forty-Sixer and one of the only staff who knew the high peaks…I was sent often with groups of kids just a few years younger.” Accompanied by a fourteen or fifteen year-old counselor in training, the group would be dropped off in the wilderness with only the bare essentials: sleeping bags, a change of clothes, rain and cooking gear, canteens, a First Aid kit, a compass and food.

“We had the freedom and independence to do things then that you could never do today,” Jim observed. “[Camp] gave me a place where I felt most like myself. And having that goal—becoming a Forty-Sixer—gave me something to strive for. It gave me that love for the wilderness, for that rugged outdoor experience.” Jim also developed an appreciation for the quiet times, for the chance to soak in the “idyllic setting” and talk with friends or counselors. Beyond the adventures, he found mentorship and camaraderie.

“Ultimately, I think that’s what took me away from Rye,” Jim reflected. “It gave me a travel bug [and the] desire to see the wider world.”

After graduating from Rye High School in 1970 and the University of Maine at Orono in 1974, Jim set out “on a journey of discovery” throughout his twenties. During this time, he lived in New York City, moved to San Francisco, and took a series of short-term “low-paying, character building” jobs. By his early thirties, Jim had settled into married life, fatherhood, and a job at British Petroleum Company. When he was laid off in 1986, he returned to school to become a teacher. An avid reader, Jim also wrote during those years. “I fancied myself a chronicler of my own generation,” he laughed. Much later– in 2015–he would publish a memoir No Experience Necessary: The Redemption of a Bohemian Zero, in which he devoted a full chapter to his time at Camp Mohican.

In 2003, Jim returned to the east coast to care for his aging mother, who had lived alone in Cambridge, New York since her husband died in 1996. When his mother passed away, Jim and his second wife Suzy sold her house and settled in Cambridge, a small town of just over 2,000 residents an hour south of Lake George on the Vermont border. After 20 years of west coast city living, Jim had returned to the mountains he loved as a boy. He took a job as an English teacher, and later Dean of Faculty at Long Trail School, a small, independent day school in Dorset, VT, where he remained until retiring in 2016.  His daughter Lily, now married, lives in Chicago; his sister Ellen Slater still lives in Rye.

It’s been fifty years since the boys of Camp Mohican laced up their hiking boots for the last time. However, there’s a bond that time and distance can’t erase. Earlier this year, Jim contacted forty or so of the camp’s alumni and suggested a summer reunion. Three of the men, including former Rye resident Ralph Chiarella, will join Jim at the YMCA’s Silver Bay Conference and Family Retreat Center on Lake George over the weekend of August 23-25. Those who can’t attend will undoubtedly be with the small group in spirit. In an email to the Rye Y, Tex Kelly wrote “Those summers were the best of my life.”

The sale of Camp Mohican was “a big blow to many who loved the place,” Jim remarked. “However, I carry the memories, images, and experiences of those six summers to this day. Camp Mohican was for me – as it was for a generation of Rye area boys – the formative experience of my young life.”

by Denise Woodin, Director of Community Impact and Social Responsibility
Appeared in the Rye Record,  August 23, 2019