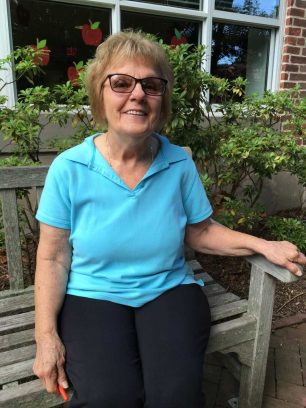 Back in the day, Bill Little must have cut a dashing figure. A stunt driver for King Kovaz’s Auto Daredevils in the late 1960s and early 70s, Bill crisscrossed the country, thrilling audiences as he drove cars airborne at state fairs and exhibitions. He certainly caught the eye of Dottie Archer, then a young divorcee with two daughters.

“I was at the Danbury Fair and I met the love of my life,” Dottie recalled during a recent conversation at the Rye YMCA. It was 1972 or ’73 and Dottie had come to the fair to race, of all things, ostriches. However, it was her meeting with Bill that stands out in her memory.

“He traveled all around and he happened to be at the fair for ten days. It was just like my Prince Charming, you know? He was also a star, which made it very exciting.”

Now a 77-year-old grandmother who is nearing retirement from her job with the New York State Thruway, Dottie Little serves as vice president of the Rye Association for the Handicapped. When she and Bill married, she never dreamed that her vital husband would suffer a massive stroke that would upend their lives, but ultimately open doors as well.

After the couple wed, Bill “settled down…and got a real job!” Dottie said. “We were a great family. Everything was going well. We were planning on retirement. And Bill went in for carotid artery surgery to prevent a stroke. He had one surgery; the following month he had the second and he stroked out.”

Dottie paused. “Things were very grim. He was in a coma. The whole left side was gone. And the neurologist said he would be in an institution for the rest of his life. So my life made a complete turn from Prince Charming to like hell. I didn’t know what was going to happen. It was very isolating and very scary.”

The first ray of hope arrived when Bill regained the use of his legs after six weeks at Burke Rehabilitation Hospital. “From there on in, I just prayed that something would come into his life that would make his life a little more enjoyable,” Dottie said. “I was going to work so I had a little break. He was a hard-working man and now he was confined to home and going out with me.”

“Then I went to a senior swim in New Rochelle at Beckwith Point,” she continued. “And I met Irving Rothman, who was a longstanding member of Rye Association for the Handicapped. That’s when my life opened up.

Bill and I came [to the Rye Y] on Mondays and Fridays and it was 45 minutes of swim and then coffee and cake and he met so many wonderful people here. He had so much encouragement from the Rye Association for the Handicapped and from the Y faculty. Before you know it they know your name and you felt like you were a friend. There are so many people here who have challenges. And they were living and happy and having a good time. I felt so great because now he had some comradery and he was being a person himself instead of just me driving him around.”

Ten years after his stroke, nine years after he found new life through the Rye Association for the Handicapped, Bill died suddenly in 2011. “I was quite angry,” Dottie remembered. ”A little scared, but I think I was more angry. You plan on retirement, you plan on everything and life changes. At his funeral, the Rye Association for the Handicapped asked me if I would stay on as a volunteer. And I did, and that was the best thing I ever could have done.”

Dottie threw herself into volunteering, becoming the vice president of the Rye Association for the Handicapped and helping at the annual Rye Derby. Earlier this year, Dottie shared her story with Y supporters by appearing in a video and in person at the Y’s annual fundraising benefit. “There’s nothing I wouldn’t do for the Rye Y if they asked me to do it. I have such gratitude for this place. It was just life- changing.”

As she looks forward to retirement this fall, Dottie is as busy as ever, swimming at the Y, fundraising and organizing events for the Rye Association for the Handicapped, spending time with her daughters and grandchildren, and exploring all of the offerings at local senior centers and libraries.

Looking back, she reflected “there were good times, there were bad times. There was my Prince Charming. There was a hell of a stroke. But it was a life lesson. It was all a growing experience. And I’m comfortable with myself now and I’m comfortable around people. I guess you have to keep growing until you pass away. And that’s what makes life exciting, because everybody has to learn something new.”