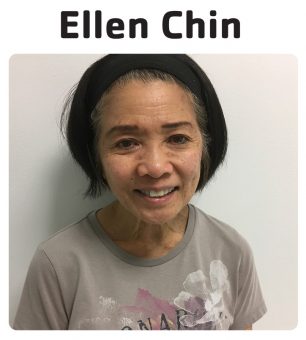 I joined the Y because they were having a promotion. It was after they built the extension, in the 1980s. Before that, because I lived in Port Chester, my friend and I used to go to the Y there. But then she heard that they were waiving the joiners’ fee at the Rye Y, she said “let’s go over there. It should be nicer!”

At Port Chester facility, we were doing the treadmill, we were doing some of the machines to build up strength, and maybe the stationary bikes. When I came here, I was only able to take classes on Saturdays and Sundays because I was working. I would take the Zumba class and the yoga and Pilates classes at the Wainwright. On Friday nights I would come here and work on the machines.

In November 2016, I retired and started coming here during the day. But I didn’t start taking more classes until about January or February. Now I take the TRX twice a week, I take J.T.’s functional fitness class, the two Tai Chi classes, and the Enhance Fitness class three days a week. I also get here a half hour before the classes and use the leg presses and the recumbent bike in the Fitness Center.

But what was really good—I was so used to being somewhere, and going somewhere, when I was going to work—that this is almost like work…except it’s more fun! I worked downtown at the New York City Archives. I loved my job and if I didn’t have to commute, I’d still be there.

My goal is to maintain my health and to improve my balance. Taking the classes has helped with that. And it’s nice to see a lot of people. Everybody’s just so friendly and very inviting. It’s been a very enjoyable experience and it gives me someplace to go.