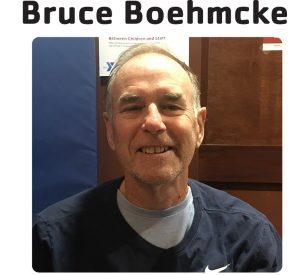 I joined the Rye YMCA in 1999 and I’ve been a Rye resident since 1980. I had a very serious heart attack in June of 2018, so now I’m taking my health very seriously. It was a wake-up call for me. I used to work out randomly and never enough, as my wife Ruth Ann would say. You should get her story; she is the Rye Y’s biggest fan of all time.

Anyhow, now I work regularly with personal trainer George Lambrecht twice a week so I’m an even bigger fan of the Rye YMCA. He is terrific. I do two half-hour sessions with him a week and then work out on my own. I’ve built a special relationship with George but everyone here is friendly.

The Rye Y is a great atmosphere and the facility is well taken care of. I am also long-time friends with Vera Merlino, who just retired. It’s nice to say hello to someone that you know when you come in.