I’ve been in Rye for almost 30 years and have been with the YMCA at least two decades. My older son Syd is 17 years old and I think when he was six months old we started coming to the Y very regularly. 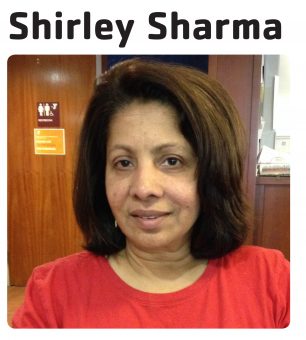 We came to do his little activities. Ellen [Watermelon] would do something with the young kids. One day he went missing and he was found in the weights room! He was playing with all the weights and he was about 2 years old.

My kids learned swimming here, which I really appreciate because I’m not a good swimmer. I have two boys 17 and 15 now—and they were on the Y swim team. Now they do crew and they had to pass a rigorous swim test for that.

My oldest comes here to work out sometimes after school. I come in to use the gym sometimes and love the Zumba classes which I try to attend at least thrice a week. In the past, I did personal training with Kaleena but I stopped because Zumba took over. The instructors are great! Since I work, I do things according to my schedule. I’m the one who uses the Y the most. This year, after nearly 20 years of being a member, my husband started using it on the weekends.

I really love my association with the Y. It’s convenient and is a community that we belong to. I’m a loyal member and don’t want to go anywhere else.