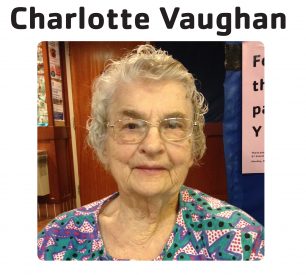 I’ve been here since 1974. I belong to the Rye Association for the Handicapped. Many of us came to the swim program. Many didn’t continue. But the water program was always there. And I still belong to that organization. We have a couple meetings and a luncheon. I’ve enjoyed it so much. I have a lot of problems, a lot of arthritis and now my shoulders don’t work but I try to keep moving.

My son came here when he was young until he was out of high school. He belonged to the swim team. He held a lot of records here. He was a big swimmer. So we were here a lot. We were very dedicated to the Rye Y. As a result, he’s still coaching a swim team at a Y where he lives. He’s very good—he has a very good following. I have a daughter who was a swim director also. It was traveling all over for swim meets, but it paid off. They enjoyed it.

Being part of the Rye Association for the Handicapped, I just love the exercise. It keeps me going. And it’s a nice group of young folks. The swim instructor is great. I’ve been here for so long, I just feel like, it’s my place! I had four children, but they’re all over the place. This is like another family to belong to.