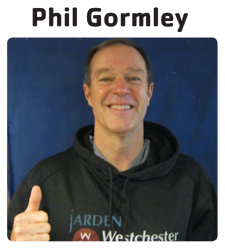 I’ve been a Y member my whole life and joined the Rye Y 22 years ago when I moved to Rye. I primarily came here to swim and used the Y for triathlon training. Then they started a spin program and I became one of the first instructors. It’s probably been 19 years now. Also help instruct the Triathlon Class at the Y.

It has been just tremendous to get to meet, train and inspire people. I’m involved with multiple charities and events, and the Chairman of the Westchester Triathlon Committee for 12 years. I reached out for the Rye Y to become a charity partner because I know how important the Y it is to the community. For the past 12 to 15 years the WTC has donated at least $15,000 a year to the Rye Y.

The Rye Y has been an integral part of our family life as well, with my spouse of 32 years, Nuria, and my children Dan, Kian and Meghan having grown up with its programs and using the facility.

I know how much sports camaraderie and community helps fill out people’s lives as far as healthy lifestyle, positives and friendships. I’m involved in the Rye Y’s post-Thanksgiving swim partnering with LIVESTRONG at the YMCA and MAC Angels. (a charity supporting those with ALS). I also volunteer at the Rye Derby. I was a recipient of the Community Service Award from the Rye Y, and I have also accomplished the All American Rank for USTA Triathlon Association multiple times. I was a TnT Triathlon Coach for the Leukemia and Lymphoma Society for 8 years, training 100s of athletes.

I like to inspire people that for whatever their cause or passion is…. to get involved and make a difference. I’ve found that whatever you GIVE, you get back five-fold. And there is no more supportive community than the Rye Y. It feels like it’s family and it’s a wonderful family to be a part of.