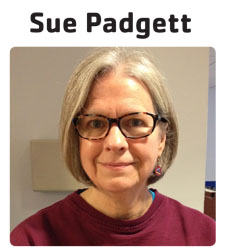 I first came to the Rye Y twenty-two years ago. My son was probably three and my daughter was in third grade. I started working in the babysitting room because I could bring him with me and still get a paycheck, which was wonderful. During the summer, I starting working at the summer camp as a counselor for several years and then as the camp’s pre-school director. My kids went to camp, free, and I still got a paycheck, which was awesome.

My daughter was a volunteer at the Y for many, many years. She ended up with over 1,500 hours of community service and won the Woof Haneman scholarship. She’s now a lawyer and my son received his Master’s in GIS technology. I now have two jobs. I teach pre-school at the Community Synagogue in the mornings and then I come here in the afternoons to work in either the Afterschool program or Child Watch.

In June 2014, I got a cancer diagnosis after having surgery for another reason. After the surgery, the pathology report came back with a surprise—I had endometrial cancer. I went through radiation for six weeks, until the end of September 2014. I didn’t know what to do. I found out about LIVESTRONG at the YMCA, and that there was a class starting in October, so I joined.

There were ten people in my group and it was awesome. My coaches were Sally Braid, Stephanie and J.T. They worked us very hard. I started getting invested in working out and realizing that life really is too short. I now exercise five or six times a week between my two jobs. I go to Enhance Fitness and the ExerZone, where I take Natalie’s Senior Circuit class. I also take the Limbercize class at the Wainwright House and work out in the Fitness Center, sometimes with my husband. I joined Laura Laura’s Summer Challenge last summer with some of my co-workers. That was really hard, but I lost the five pounds we were supposed to lose. I feel better than I have in years.

I now belong to a LIVESTRONG alumni group, which meets four times a month. I’ve met a lot of LIVESTRONG participants there and at LIVESTRONG Day, where we celebrate and are supported by another year gone by. I always felt like I belonged at the Y, but after LIVESTRONG, I felt completely “this is my place.”

It’s been a long haul. Through all these years, I’ve had periods of time when I exercised in different ways, but right now it’s just a continuation of the momentum I gained in LIVESTRONG. LIVESTRONG, the friends I’ve made in my fitness class, and my co-workers are the things that keep me cemented to the Y.