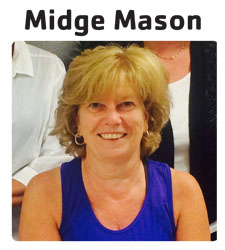 I became a member of the Rye Y in September of 2015 after completing the 12-week LIVESTRONG at the YMCA program. Here’s how I got to the Y.

I was diagnosed with lymphoma in September 2014 – both on the dura of my brain and left parotid gland. As scary as my diagnosis sounded, I knew I had the best doctors who would do everything possible to cure me. The diagnosis helped explain two seizure events that I am now grateful for because they were critical warning signs. I was positive and optimistic throughout my testing and treatment. Three months after my treatments began, an MRI confirmed that the IV chemo drug I received weekly was killing the lymphoma. Three months after that, a neighbor suggested that I go to the Rye Y and join the LIVESTRONG program.

When I came to the LIVESTRONG program, I wasn’t sure what to expect. Barbara Hughes was the first person I met. She won me over with her passion and enthusiasm. The group of survivors that I spent 12 weeks exercising with are strong women on their own personal journey to good health. The three trainers who supported and encouraged us are truly special people to give their time so generously. LIVESTRONG gave me the confidence to believe I could exercise and push myself to new levels. It also helped me make a commitment to myself to stay on this healthy course. I recently lost 20 pounds, which I attribute to the options available to me at the Y and wanting to be the best I can be.

Wow, who would have thought – I came as a cancer survivor and I’m now learning to swim. The Y has two fabulous pools. I’m an adult who never learned to swim and feared the thought of it, though at times I wished I could do it. I am currently stepping way outside my comfort zone and participating in the Water Discovery Class for Adult Non-Swimmers. I’m still scared, but loving it.

Every single person at the Y is so nice. That in itself is enough to make you keep coming. I love the journey I’m on right now. I’m so grateful for the encouragement and support I’ve received since becoming a Rye Y member.