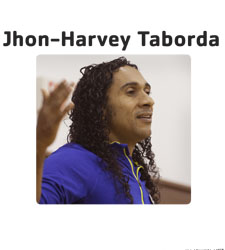 I started coming to the Y when my daughter Zen was nine months old and we wanted to do the Daddy and Me swim classes. She is now 11 years old and part of the Wave Ryeders swim team.

After we were here for a while, the Y was having a blood drive for the American Red Cross. I went to give blood and ran into a gentleman who had a personal trainer t-shirt on. I had been thinking about doing something like that. I had been bartending to support my family. This man told me that the Y was looking for a kickboxing instructor. I said ‘that sounds like something I could do” so I went to talk to Diana. I had always been involved in martial arts and had taught Tae Kwon do and Judo, but I didn’t have the certifications to teach in a fitness center. Diana suggested that I lead a demo class and we could go from there. So the following week, I taught a demo class and it was a success. I brought in the certifications I did have and she gave me the opportunity to start with one class. Later, I got my TRX certification, and then the yoga, which was 200 hours over three months. Now I’m teaching eight different classes.

I just returned from a yoga intensive—100 hours over two weeks in Punta Gorda, Nicaragua. I’m working toward my 500-hour certification. It was so amazing, so beautiful. There was so much knowledge; it was humbling to be there. You think you know a lot, but it’s so little compared to the vast amount of knowledge that lies out there. It gave me a lot of insight about what I want to do to be a better teacher, a better student and a better person.

There were yogis from all around the world: Sweden, Norway, Australia, Singapore. It was so wonderful to have all these different views. Although yoga is one word, it encompasses such a wonderful array of people trying to do the same thing, which is to become more spiritual in the quest to know themselves better and become a better person to the world.

At the Y, there’s such a sense of community. You have the opportunity to learn every time you come in here. It’s a place where you come and make friends. Your family knows families. And it extends beyond the YMCA. A lot of Zen’s playdates are school-based, but others are the kids of people I train. Those kids have become Zen’s friends, so that’s a wonderful thing. You don’t get that everywhere you go.

I teach in a lot of places, but at the Y, I’ve found where I belong.