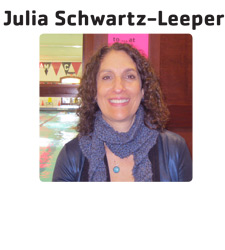 I have been coming to the Rye Y for 26 years. My twin boys learned to swim here. Now they are 29 – one got married in September and his twin brother is getting married on New Year’s Eve! My kids went to summer camp and my daughter did gymnastics at the Y.

Several years ago, I started taking yoga classes at Wainwright with Susanne. I decided to go for my yoga teacher training, not to teach but just to further my own practice. One day Susanne called me to sub her class and after that I started subbing on a regular basis. Now I teach yoga here four days a week , including at the Wainwright House. It is an honor to practice with the members at the Y. And I am so impressed with the Y staff – Diana is amazing, so warm and supportive. Gregg leads with a quiet strength. I’m an Executive Director for a non-profit myself and see both Gregg and the Y as an inspiration and a role model.

I meet the most fascinating women in the locker room at the Y. Today, I met a woman who teaches dance to people with Parkinson’s and another woman (also a dancer who studied with Twyla Tharp) who is an Endocrinologist at NYU. And that was just in another morning at the Y.