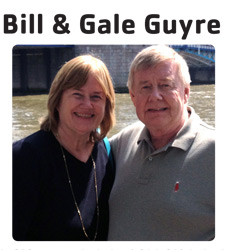 Bill: I began working for the Rye Y a little more than ten years ago and met Laura soon after when she started working there.

Gale: While I would occasionally stop by the Y to visit my daughter, I was not a member until after Bill and I were married.

Bill: When Laura first met me, I was in a relationship. But after a few years, when she knew I was single again, she started saying “you should meet my mother.” About four and a half years ago, I was on my way out the door and Laura was on the phone with Gale. She handed the phone to me and we set up our first date.

Gale: When he learned I lived in Mamaroneck, he said “let’s have coffee at Café Mozart.”

Gale: And then we got married two years after we met. First, my older daughter Justine got married in England in 2010. Then Laura got married in 2011. And then 2012 was our year! When I became a member, Laura encouraged me to use the fitness center and take Tai Chi classes.

Bill: Gale and I now take Tai Chi together. I probably wouldn’t have taken Tai Chi without her.

Gale: And he spurs me to use the fitness center. We’re both in a little better shape than when we got married, and we’ve met a lot of nice people here who seem to want to develop friendships. Even before I was a member, I felt very welcome because of my connections with Bill and Laura.

Bill: There’s no question that the Y plays a crucial role in a community. The Rye Y as a wellness center for this community is not just “swim and gym.” Every community needs a place like this. It’s for all ages. And being active helps you stay healthy not just physically, but mentally as well.