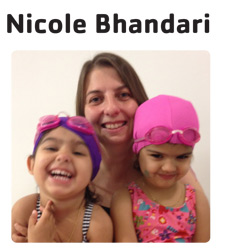 Nicole is originally from Germany and had not had any experience with the Y until she moved to New York City and became a member of the West Side Y.

Nicole decided that the location of a great Y was important to her when deciding where to live and raise her family (three daughters, –3 year-old twins Annika and Amalya and their 6 year-old sister, Adele) and she chose Rye Neck because of this Y. Nicole enthusiastically chatted about swimming at the Y, and referred to her family as “a swimming family!” Nicole mentioned that the staff has been fantastic and she is amazed at what each of them (herself included!) has learned about stroke mechanics. She added that her daughters have also enjoyed the Y’s gymnastics program.

Perhaps most importantly, Nicole discussed how important it was for her to find a place where her children felt a “sense of belonging” and an “affiliation.” Nicole remarked that her children come to this Y and feel welcomed and cared for by the staff.

When asked if the Rye Y is her Y, Amalya responded with a giant, ear to ear grin “Yes!”