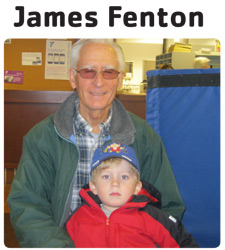 I have been a Rye YMCA member for over 30 years. I first started coming when my son was 7 or 8 yrs old and taking classes at the Y. He later became a lifeguard and worked at the Y for a few years.

When I first started coming, I mainly used the swimming pool and then for many years was an active racquetball player along with several other men who played regularly around the noon hour. As I have gotten older I don’t play racquetball anymore but still enjoy the pool and using the machines in the fitness center. I have always viewed my workouts at the Y as my “daily medicine.” I have also made some nice friends over the years, especially on the racquetball court.

Now in addition to my own use of the Y, I am bringing my grandson Elliot 3 days a week so he can participate in some of the kids programs. So things have really come full circle… first coming to the Y with my son and now I come in with his son. The Rye Y is really a positive outlet for the people who use it!