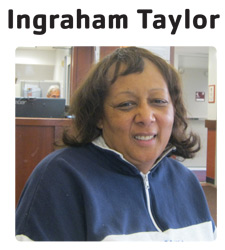 Ingraham has lived in Rye for 51 years. While she didn’t come to the Rye Y as a child, Ingraham wanted to be sure that her son could benefit from the Rye Y. She participated for several years, without being a member—paying nearly double for classes as a non-member. Asked why she chose that route, Ingraham stated that our country was in the heat of the civil rights era. Initially, she did not feel welcomed here as a minority. However, she was determined to have her children experience what the Y has to offer. Eventually, Ingraham realized that this was where she belonged too. She joined as a member and her son Andre became a part of the staff at 15 years old as a “CIT.” While attending college, Andre was also employed by the Y.

Ingraham also spoke about the personal challenges she has faced throughout the years – some that have kept her away from her Y at times. Yet, she always comes back. She especially loves the water. She attends the water aqua jog classes and notes that “the water gives me a spiritual energy that resonates a calmness and peace that I take for the rest of my day and week.

Ingraham’s spirituality is important to her and she feels blessed that she can always turn to her Y and the many relationships she has formed here—“true, authentic relationships are built here!” she declared.