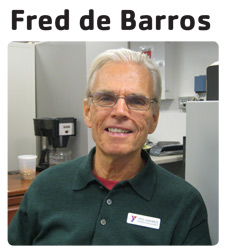 Five years ago my brother Jayme passed away in Santa Barbara, California. This event prompted me to seriously think about my own mortality and to question whether or not I was taking adequate care of myself. I knew that I needed to exercise more but wasn’t sure about how to go about it. I thought of the Rye YMCA because my children had been members while growing up in Rye. I went on a tour of the Y and realized that this was not only a great place for my children but for me also and I joined immediately. The staff in the fitness center was very helpful in getting me started on Fitlinxx, which I have continued to use along with the upright bike twice a week. I began to swim laps and was assisted by Viwat, a swim instructor, in developing my swim strokes and have now been able to swim 25 laps twice a week.

I was two years old when I moved to Rye from Manhattan with my parents and two older brothers. My two younger brothers were born soon after. I have lived temporarily outside of Rye over the years to attend college and to serve in the military, but have never seriously considered moving away permanently because of how much Rye has to offer, including the YMCA. After leaving the military, I married and while raising our two children completed my education and began a career with the United States Postal Service, from which I retired eight years ago.

After five years working in counseling I thought I would fully retire but was so impressed by the staff at the Rye Y that I asked if there were any part time positions available. It turns out that a position opened in Membership not long after; I was hired and have been working for the Y for two years. I enjoy working with a group of caring and competent staff in Membership. I find it very satisfying to not only offer good service to the members but to also connect with them in a personal way, whether at the Y or out in the community.