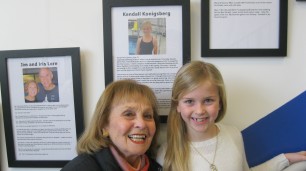 Kendall Konigsberg and her grandma

[January 27, 2016] The framed photographs and personal narratives of 36 Rye Y members and staff are currently on display at the Y as part of the 4th Annual “Voices from the Community: The Rye Y Story Project.”

Each year, Y staff and volunteers encourage members to share their personal stories, from the back stories that brought them to the Y to the successes and challenges encountered on the road to healthy living. Interviews are conducted in the Y’s lobby, within a story “booth” made from a large gym mat. This year’s interviewees ranged from young children to seniors in their 80s. 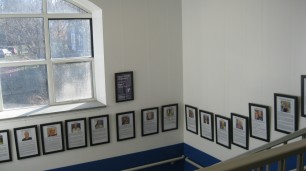 Modeled loosely on Story Corps, a national oral history project,” The Rye Y Story Project” was launched one day after Hurricane Sandy in 2012. Power outages, flooding and a shared sense of community contributed, in a round-about way, to the success of the first Story Project. Members gathered at the Y in the aftermath of the storm, and with time on their hands, told stories about their Y experience. During the last four years, nearly 200 members, staff and volunteers have shared their hopes, their accomplishments and their gratitude for the support and friendships they’ve found here.

Among the current crop of stories is Samantha Brout, who said, “I felt like family from day one. By my second day here, they were calling me by name. I have a bad knee and a bad back, so I haven’t been able to do any land classes. But I do the aqua classes every day, five days a week and sometimes Saturdays. I missed a day and the life guard asked ‘are you o-k?’ Nobody else does that. After retiring, I had no purpose. The aqua classes get me out of the house and give me incentive to eat right.”

Executive Director Gregg Howells remarked, “We were touched and gratified by the stories we heard during the Story Project. It’s clear that the Y is so much more than gym or a childcare center; it’s a community hub where friendships begin and goals are achieved.”

The 2015 Story Project exhibit will run through February 15. Members of the public are welcome to stop by to view the stories and take a tour of the facility.