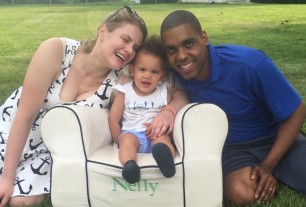 Growing up in the landlocked city of Santiago in the Dominican Republic, Edison Blanco never learned to swim.  So when he walked into the Rye Y in July 2014, at the age of 31, he had only one goal in mind: join an adult swim class. Within weeks, he had found so much more.

The son of a teacher, Edison’s early memories were of long summers spent in Washington Heights, a lively, Latino-dominated neighborhood in northern Manhattan. Because her summers were free, Rosa Nelly Blanco would bring her children to visit relatives in New York. By the time he turned twelve, Edison was working alongside his uncle in his grocery store, learning the business and forging strong ties to his second city.

“I made a connection here,” Edison observed during a recent conversation at the Rye Y. “I said ‘when I grow up, I want to live in the U.S.’”

After earning the equivalent of an Associate’s Degree in Santiago, Edison realized that he had the freedom to choose his future.  In 2004, at the age of 21, he packed his bags and moved to New York, where his uncle put him in charge of his store.

As luck would have it, there was a junior high school across the street from the grocery store. And among the staff was a Teach for America faculty member who would drop by the store every day to buy a sandwich for lunch. A Spanish minor in college who had spent a semester in Madrid, Heather would talk with Edison about music, and when he asked her to a Dominican movie, she accepted. They started dating, even though Heather was making plans to attend the University of Chicago Law School. The couple kept a long-distance relationship going, even after marrying in 2006. By 2008, Heather had graduated and the Blanco’s were finally able to establish a home together.

While Heather studied in Chicago, Edison was approached by a supplier for the grocery store, who asked for his help in revitalizing his company. In 2007, Edison left the family business and started working for United Food Processing Company.  Although his new job took him all over the City, first as a driver and later as a salesman, Edison found time to take English classes at LaGuardia Community College. Growing more comfortable with the language, he then enrolled in LaGuardia’s Associate degree program in Accounting. He graduated in 2012, the year Heather landed a job with a financial institution, and the Blancos moved to Mamaroneck. In January of the following year, Edison transferred into a four-year accounting program at Baruch College in mid-town Manhattan.  And In October, Heather gave birth to their daughter Eleanor.

“The bachelor’s degree was more demanding,” Edison recalled. “Work, family, school… it was too much.”

Recognizing the impending challenges even before Eleanor was born, Edison quit his job with United Food and made plans to be a stay-at-home dad and student. “I increased my coursework, but consolidated it into fewer days so I could be home with Eleanor,” he explained. “That way I could have quality time with my family and still pursue my education.”

When Eleanor was just months old, Edison began looking online for a local swim class. “I was never involved in water activities growing up,” he noted. “There was no pool in the neighborhood. Heather was a good swimmer but I never learned.” After finding the Rye Y, he signed up for a class for himself and then learned about the Baby and Me Gym Class and the Parent/Child swim for both father and daughter.

Around the same time, Edison met an alumnus of Baruch who advised him to get involved in extracurricular activities. With that in mind, he met with the Y’s Wellness Coordinator, Laura A. Laura, who told him about the Rye Y’s new Togetherhood program.  A national YMCA social responsibility initiative, Togetherhood engages members in volunteer projects outside the walls of the Y.

“My original motivation was to improve my resume,” Edison confessed. “But once I started getting involved with Togetherhood, I began to view community service as a need of all citizens. We’re entitled to it, and we must do it.”  He continued, “We get detached from what the real needs are.  We all, as a society, need to do community service.  You don’t have to be a Bill Gates; we can all make a difference.  It doesn’t have to be a full-time job. A little bit can mean a lot to others.”

In addition to learning to swim, Edison works out in the fitness center and has become a co-chair of the Togetherhood Service Committee. Heather enjoys yoga at Wainwright House. And Eleanor, now 20 months old, has made friends in the Y’s ChildWatch room. “I’m so glad that I’m here now,” he said gratefully.

This summer, Edison is taking one last class to finish his Bachelor of Business Administration degree and is working full-time as an intern at BDO Accounting. In the fall, he will begin the graduate accounting program at Baruch College.  Asked about his dream job, he answered “I’m still exploring my options, but work-life balance is a priority.”  He added “Having been here at the Y, I see that the people here work with love and passion.”