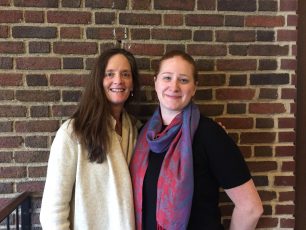 Two of the Rye Y’s veteran staff members, both from the Aquatics Department, are diving into new roles. Sheila Viger has stepped into the Assistant Aquatics Director position formerly held by Liz Koenig. Pam Villeneuve will serve as the Health and Safety Coordinator.

Sheila began teaching swim lessons at the Y in 1993 as a volunteer. Even then, she was no stranger to the Y’s pool. “The Rye Y has always been part of my life,” she recently commented. “I learned to swim here. I was a member of the WaveRyeders team. I believe in the Y values.”

In 1998, following the births of a son and then a daughter, Sheila was hired to teach group and private swim lessons and the Mommy and Me and Aquacize classes. As her children got older, she took on more classes and for a time, served as coordinator for the Y’s water exercise program. She is also certified as an aquatics personal trainer.

In her new role, Sheila plans to look at the Aquatics program as a whole with the goal of making a strong department even stronger. “I want to make sure there’s a good match between each staff members’ talent and the classes they’re teaching. I want there to be buzz in the community about the Rye Y’s aquatics program.”

Pam joined the Rye Y team in 2007 as a summer camp counselor. That September, she was hired as a swim instructor and became a lifeguard the following year. By 2013, she was leading the Y’s health and safety classes, including lifeguard, babysitting, CPR and First Aid trainings. She also became a deck supervisor, overseeing all of the swim lessons.

“I became more and more integrated into the Aquatics Department,” she noted, “and I learned more and more. It was a beautiful transition from one position to the next.” Pam has also raised her daughter, now five, at the Rye Y, bringing her to baby swim classes and watching her progress through the levels.

As the Health and Safety Coordinator, Pam has ambitious plans. “Every staff member in our building who can be trained, will be trained. I want everyone to be confident in their skills and comfortable stepping in when there’s an emergency. Everyone should know how to keep our members and our community safe.”