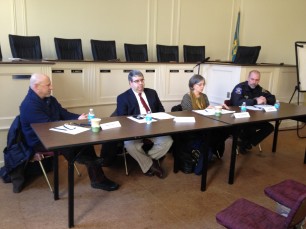 [Rye, February 14, 2014].   Academic pressure. Over scheduling. Easy access to drugs and alcohol. Too much texting, sexting and social media. And parents who are stressed themselves.

According to a panel of four professionals brought together by the Rye YMCA, these are some of the critical challenges facing today’s teens.  The panel, which convened at Rye City Hall in late January, drew roughly 25 members of the Rye Y’s Healthier Sound Shore Coalition and guests with an interest in youth issues.

The Healthier Sound Shore Coalition grew out of Activate America, an initiative developed by Y-USA to respond to the country’s growing obesity, declining fitness and chronic disease crises. The goal of this coalition—now called Healthier Sound Shore– is to create long-term, sustainable improvements in lifestyle and health in the communities served by the Rye Y. At recent meetings of the group, members expressed concern about the various social, emotional, physical and mental health issues experienced by today’s youth.

Dinah Howland, long-time chairperson of the Coalition, asked the panelists to discuss the issues seen in their work with middle and high school students. Panelists were also asked to describe how their organization responds to these issues and to highlight any bright spots.

While each panelist emphasized different aspects of the problem, all agreed that teens are facing more pressure than ever—whether on the playing field, in the classroom or at home. Peter Green, a social worker at Rye Middle School, observed that “teens feel responsible for academic success,” but are experiencing new pressure thanks to increased testing. He suggested parents be realistic in their expectations.

Scott Altabet, the Executive Director of the Harrison Youth Council commented that overloaded schedules lead to sleep deprivation which leads to a lack of focus, resulting in kids who are stressed and exhausted. Noting that parents need to deal with their own stress as well, he added that his agency offers stress reduction techniques for parents and kids.

Janet Buchbinder, Coordinator of Larchmont-Mamaroneck RADAR, reported that her group—which includes teachers, parents, social workers, police and school administrators—has seen an increase in self-harming, such as cutting and burning. She stated that RADAR tries to support parents as well as students, adding that parents are often confused about how to deal with their teens. Buchbinder also provided a bright spot in the discussion as she described the “Tiger’s Den,” a new space at Mamaroneck High School designed to support “the emotional, social, physical and mental health” of students.

Calling himself a “helicopter parent,” Scott Moore, Administrator for the Port Chester/Rye/Rye Brook Emergency Medical Services, urged parents to know “where your kids are going and what’s going on there.”  He blamed the media and the internet, especially when parents aren’t monitoring, for bad behavior, and suggested volunteerism, sports and music as positive outlets.

The meeting ended with a lively discussion between audience members and the panel. Summarizing the key points, Howland noted that outreach to parents seems to be the next step. She promised that this panel is just the beginning of further dialogue.