There were speeches, of course, and warm affection for honorees, but it was the unofficial cheerleading squad from the Rye Y’s after-school program that stole the show at the Y’s Annual Dinner on Wednesday, May 27. Led by Y staff member Tanisha Miller, the beaming 6-8 year-old girls charmed the crowd of approximately 170 Y supporters. 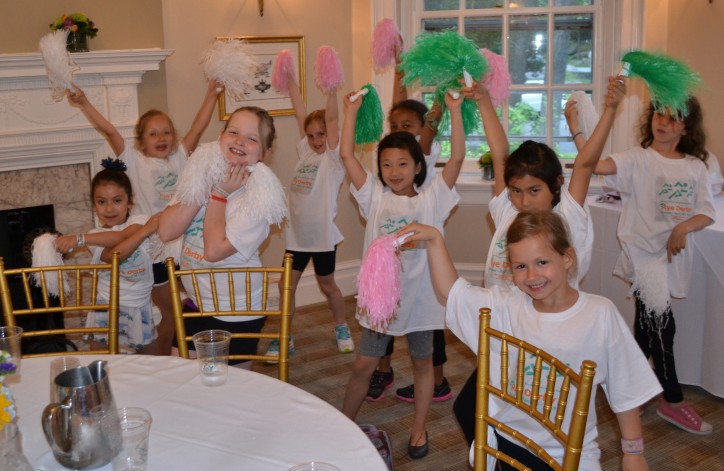 Held at the Apawamis Club in Rye, the Annual Dinner gave board members, staff and community residents the opportunity to celebrate the Y’s accomplishments over the past year and to recognize the commitment of its volunteers.

Before turning the microphone over to Rye Y executive director Gregg Howells, Tice looked back at the Y’s 2014 Centennial year, announcing that through a special centennial campaign, the Y raised nearly $2 million to ensure the organization’s future.

In his remarks, Howells reflected on the “whirlwind” of centennial activities, adding that “we never lost sight of the day-to-day needs of our members and our community.” To illustrate the Y’s impact over the past year, he described several programs and initiatives, including Togetherhood, which engages Y members in community service; Enhance Fitness, an exercise program that helps seniors tackle arthritis; and the hiring of two bilingual community health workers to reach out to low-income residents of Port Chester and Mamaroneck with vital information about chronic disease prevention.

The following awards were presented at the Annual Dinner: 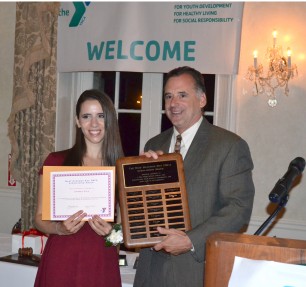 Founded in memory of long-time Rye resident Woof Haneman, this $1500 annual scholarship and award was established to acknowledge an outstanding Rye High School senior. This year’s award was presented by Gregg Howells to Lindsey Vita.

Lindsey has been a member of the Rye Y’s teen leadership club, a CIT at camp and a camp counselor. She is currently completing her senior year internship in the Y’s fitness department. She has volunteered at Gilda’s Club, where she led exercise classes for those affected by cancer, and at the Rye Derby. She has also helped at the Access to Care Health Fair in Mamaroneck and at various wellness events at area elementary schools, all while maintaining the highest academic standing at Rye High School.

This award to given to an individual who has made a positive impact on the community. This year’s award was presented by Rye Y trustee Dinah Howland to Eavan and Conor O’Driscoll.

A power couple in the best sense of the phrase, Eavan and Conor have made a significant impact in Rye and beyond. In 2004, Conor joined the Y’s board of directors and served a three-year term. During that time, he stepped up to co-chair the Rye Derby Committee, a role he has held for over ten years. Conor’s commitment to community service extends to Resurrection Church and School of the Holy Child, where he is a member of both organizations’ Capital Campaign Committees. He also chairs the Annual Fund at Holy Child. Back in his hometown in Ireland, Conor serves on the board of the renowned Wexford Opera Festival. He is Chairman of the U.S. Board of GOAL, an Ireland-based development and disaster relief organization.

Eavan has combined her passion for education, fundraising experience and academic credentials to make a powerful difference for a struggling school in the Hunt’s Point section of the Bronx. While she was earning a Masters in School Counseling from Fordham University, Eavan completed an internship at St. Ignatius Middle School, a private Jesuit school that serves the country’s poorest Congressional District. In 2013, the school was on the brink of closing due to lack of funding. Eavan stepped in as a volunteer to tackle fundraising and development, for two, then five days a week. Eavan now serves as President of the School – as an unpaid volunteer. She has led the school’s return to solid financial health and high student achievement. 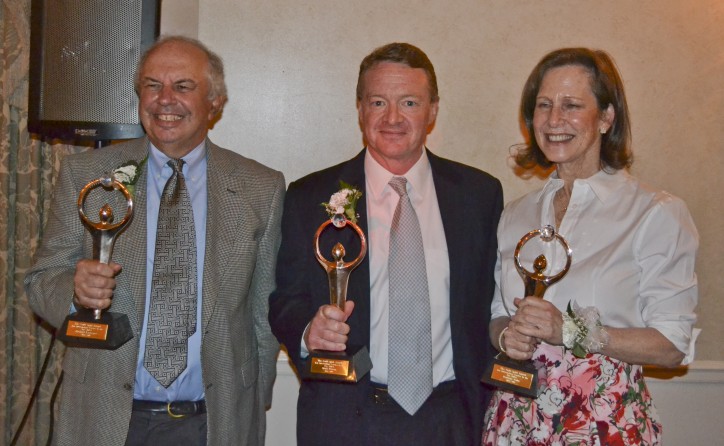