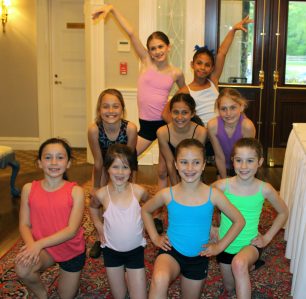 [June 1, 2017].  Over 175 Rye YMCA supporters gathered at the Apawamis Club on May 31 for the organization’s Annual Dinner and awards ceremony.  The event gave board members, staff and community residents the opportunity to celebrate the Y’s accomplishments and recognize the commitment of its volunteers. Three staff members were also honored with awards for excellence.

The program included a performance by the Y’s Team Gymnastics Dance class, which captivated the crowd with a lively dance and tumbling routine. The girls, ages 6-11, were coached by the Y’s beloved children’s performer Dawn Halasz, a.k.a. Dawny Dew.

Board president Doug DeStaebler acknowledged the contributions of outgoing board members David Reno, Doug Stern and Chris Willis.  He introduced incoming board members Jessica Bentley, John Hanratty, Alison Cupp Relyea, and Sarah Snell.  DeStaebler is also rotating off the board after two three-year terms. As the program came to a close, he passed the gavel to new board president Doug Donohue, who praised DeStaebler for his leadership and service.

Executive Director Gregg Howells shared how the staff has developed new programs and initiatives that reflect the broad goals of the Y’s strategic roadmap. These include: the Y’s role as fiscal agent for the RyeACT community coalition; a new (as of early 2016) Blood Pressure Self-Monitoring Program; a board-approved locker room enhancement project; and the Rye Y’s participation in a national YMCA learning cohort that seeks to enhance the member experience. 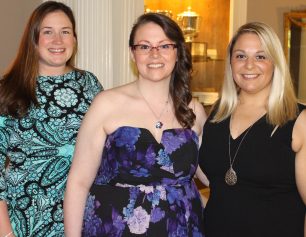 The following awards were presented:

Staff Award: Spirit, Mind and Body
This year’s recipient was Liz Koenig, Assistant Director of Aquatics and Safety, who was honored for her commitment to making the Y’s aquatics program outstanding for all participants. She has also taken the lead in developing new water safety workshops for the Rye Y’s youth members and the community at large.

Staff Award: Quality Keeper
Ashley Rosell, Assistant Director of Membership Services, received the Quality Keeper Award for her dedication to stellar service for Rye Y members and camp families. Whether she’s behind the front desk answering questions, or juggling logistics for summer camp, Ashley is consistently professional, helpful and respectful to all.

Staff Award: Excellence in Innovation
Rye Y Member Wellness Coordinator Laura A. Laura was recognized for creating and running the Basic Training class. This new program uses ExerZone equipment to help older adults build strength and flexibility. Laura is an effective trainer and a cheerleader for fitness, health and wellness for all ages. 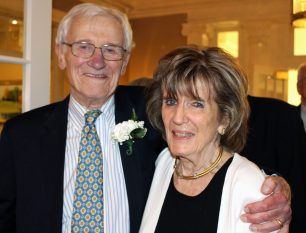 Community Service Award
Each year the Rye Y honors an individual who has made a positive impact on the community. This year’s award was presented by board member Courtney Bennett to Bob and Nancy Steed. Over the past five decades, the Steeds have devoted their time and energy to a variety of organizations, including the Osborn PTO, United Way, Westchester Children’s Association, Rye Youth Council, Rye Youth Council Players, Hudson Link, Rye Human Rights Commission, Exodus Transitional Community, Samaritan Counseling Center and many others. Both are longtime members of Rye Presbyterian Church where each has held numerous leadership posts.

Nancy and Bob say their most meaningful and “life changing” service has been their 27-year (and counting) involvement with incarcerated and formerly incarcerated individuals, work that has been strongly supported Rye Presbyterian. The couple lived in Rye between 1961 and 1999 before moving to their condo in White Plains. Despite their physical residence, they tell one and all, “We sleep in White Plains but we still live in Rye”.

The Rye Y’s highest honor for volunteer service, this year’s awards were presented by Rye Y Trustee Tom Murphy to a current and former board member.

The Rye Y congratulates all of its honorees and thanks them for making the Rye Y and our community, in the broadest sense of the word, a better place.