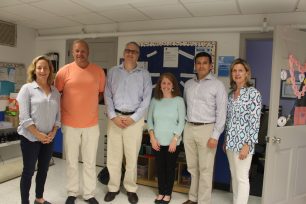 The Rye YMCA has announced the addition of seven new members to its board of directors. The members, who will each serve a three-year term, bring a range of experience to the Y.

“As a non-profit organization, we rely on the expertise of our volunteer board to help with governance, facilities issues, financial development and so much more,” remarked Executive Director Gregg Howells. “We’ve been fortunate to attract the Sound Shore’s best and brightest in the past. Our newest board members are no exception.”

Mary Capaldi:  A resident of Rye, Mary currently chairs the Coveleigh Club Swim Team. She previously served as president of the Rye High School PO and was active with the Junior League of Westchester on the Sound. Mary and her husband Robert have three children ages 12, 15 and 17.

Jon Elsen:  As a Public Relations consultant and former journalist, Jon looks forward to helping the Y with its marketing efforts. His volunteer experience includes eight years as a Rye girls softball coach. He and his wife Ellen live in Rye with their three children ages 12, 15 and 17.

Katherine Irwin: Kate works as a real estate agent with Houlihan Lawrence. She previously served on the PTO of Midland School and the PTA of School of the Holy Child. She and her husband Vincent have two grown daughters, ages 20 and 18.

Donald Sandford, Esq.: A resident of Port Chester, Don is an attorney with his own practice. He has volunteered with several professional organizations, including a stint as president of the Westchester County Bar Association. Don is married to Arelis Henriquez and has one son, age 16.

Allyson Kim: Formerly a consultant to the health care and education industries, Allyson is an active volunteer at Rye Country Day School and Duke University and previously served as the president of the Osborn School PTO. She and her husband Charlie live in Rye with their two daughters, ages 11 and 13.

Edison Venegas: A resident of Rye, where he lives with his wife Maria, Edison is a mechanical engineer with the office of Werner Tietjen, P.E. He looks forward to bringing his professional expertise to the Y’s Facilities Committee.

John Weber:  John is a managing partner with the NYC-based Court Square Capital and holds an MBA from the Tuck School of Business at Dartmouth College. A resident of Rye, John and his wife are the parents of three children, ages 16, 19 and 21.