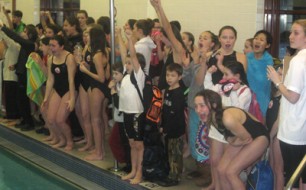 [January 17, 2013, RYE, NY] The Rye Y Wave Ryeders’ first meet against JCC of Manhattan was a nail biter.  “It was a very exciting meet!” said Kate Tiedemann, Rye Y Swim Coach.  “In the end our kids pulled it off and did a great job. I was especially proud of the team spirit and the respect the swimmers showed to their competitors, shaking hands and congratulating each other after every race.”

The Wave Ryeders are now preparing for upcoming meets with Harrison Rec on January 18 and New Rochelle YMCA on February 10.