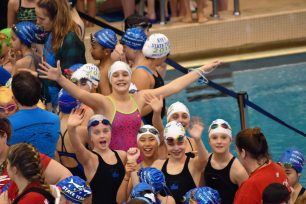 [RYE, March 23, 2018] The Rye Y Wave Ryeders capped off a winning season on March 18, placing 4th overall out of forty teams at the YMCA State Championships in Buffalo. They racked up their highest point total ever in the meet and brought home several individual and team awards.

“It was a great meet! The team achieved its best times for the season and there were many personal bests.” said Coach 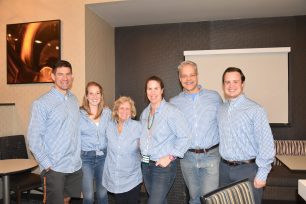 Kate Tiedemann. “Team spirit was amazingly strong with the swimmers working together and encouraging each other.”

The Wave Ryeders arrived at States in a strong position. They had won all six league dual meets in the regular season and emerged as the Westchester/Fairfield League Champions for the 13th consecutive year.  Eight swimmers qualified for the Sunkissed Invitational Jr/Sr Championships and will be heading to Charlotte,  North Carolina in April.

The goal of the Wave Ryeders program is to promote fun, camaraderie, friendship, new skills, physical fitness and positive values that extend beyond the swimming environment. The Rye YMCA offers both a Spring and Fall swim team. Pre-team is also available for swimmers not yet ready for competition.

View the program guide for details or contact Vickie Tsakmakis, Senior Director of Aquatics & Safety at 914-967-6363, extension 107, for information on the swim team or any other aquatics program.