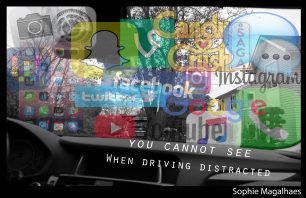 Rye High School students, their parents, and community leaders gathered at the Rye Arts Center on January 24 to recognize the winners of the Rye YMCA’s Heads Up! Distracted Driving and Walking Poster Contest.

The contest, which is part of the Rye Y’s Safe Routes to School initiative, engages Rye High School students in creating posters that illustrate the dangers of distracted walking and driving. 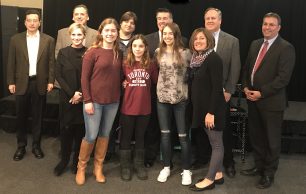 In October 2017, the Rye Y invited students in Nichole Chiffriller’s Photoshop and Digital Photography classes to participate in the Heads Up! contest. Seventy-nine students in four classes participated. After all of the posters were completed, the students narrowed the field to 20 finalists. The Rye Y then convened a panel of community judges who selected the three winners. The judges were:

The reception was also an occasion to view all of the posters, which will be on display at the Rye Arts Center until February 23. Commissioner Corcoran presented the gift cards to each of the winners, commending them for their creativity and public safety message. Several of the judges, including Mayor Cohn, Dr. Byrne, Ms. Tagger-Epstein, Mr. Levi, Mr. Dempsey and Mr. Howells, were also on hand to congratulate all of the students who participated in this important assignment.