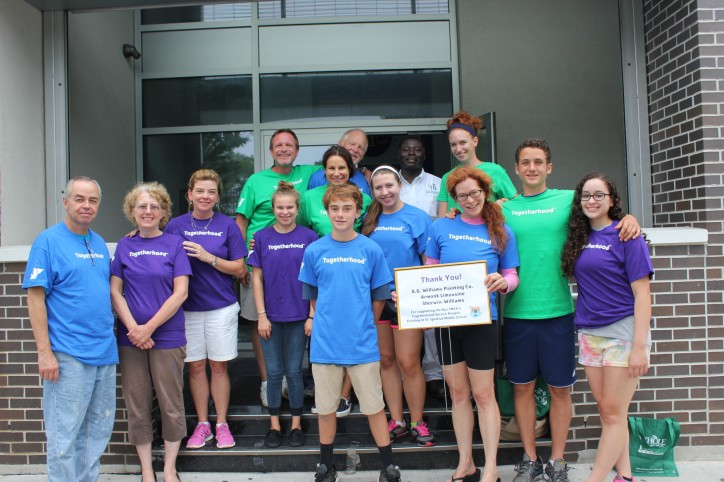 (August 21, 2014)  When Stuart Reis joined the Rye YMCA more than 20 years ago, he imagined himself working out in the Fitness Center and taking Tai Chi classes. He never thought he would wind up in the stairwell of a South Bronx school wielding a blue-stained paintbrush. Nevertheless, that’s where Reis was on a recent Wednesday morning after volunteering for the Rye YMCA’s new Togetherhood program.

The goal of Togetherhood—a national YMCA Social Responsibility initiative—is to involve Y members in community service. A seven-person Service Committee composed of Rye Y members and staff advisor Denise Woodin is charged with identifying and organizing at least four projects over the course of a year. The only restrictions on the projects are that they are consistent with the Y’s mission, benefit the broadly-defined community, and are led by Y members.

Katherine Doyle, another Service Committee member who had just ended a term on the Rye Y’s Board of Directors, suggested St. Ignatius Middle School in the Hunt’s Point section of the Bronx for the group’s first project. Doyle knew of the school’s struggles and successes through her friend Eavan O’Driscoll. Rye resident O’Driscoll is the president of St. Ignatius and has worked tirelessly to keep the doors of the school open.

“When our Togetherhood committee began talking about our first service project, St. Ignatius immediately came to mind,” Doyle explained. “I’ve been so inspired by the hard work and dedication of the school’s faculty and staff and wanted to support them, and the students, in any way we could. Our committee enthusiastically agreed.”

As co-chairs of the project, Doyle and Reis learned that St. Ignatius serves nearly 70 students in the poorest congressional district in the country. Ninety-seven percent of the 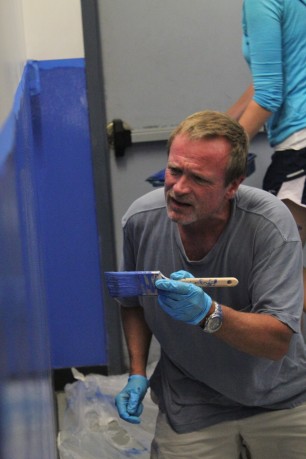 students are Latino; 3% are African-American. Every one of them qualifies for the free or reduced fee lunch program. St. Ignatius, which is tuition-free, is a shining light in a community where crime, gangs and drugs are common. The school’s mission is simple, yet profound: to break the cycle of poverty through education. Their approach seems to work: 100% of St. Ignatius’ alumni graduated from High School in 2013 and 2014 while the average graduation rate for public high schools in Hunt’s Point hovers around 41%.

When O’Driscoll requested a paint job for the school’s stairwells, Doyle and Reis jumped into action, organizing the many logistical tasks and soliciting donations from local businesses. A.G. Williams Painting Company, a Pelham-based family-owned company that counts the Rye Y among its clients, donated supplies and the services of an experienced foreman. The Sherwin-Williams store in Eastchester contributed hundreds of dollars in paint and supplies. Armonk Limousine gave the group a significant discount on the use of a van and driver to shuttle two shifts of volunteers between Rye and Hunt’s Point throughout the day.

The Togetherhood volunteers and their foreman, Nathaniel Gidron of A.G. Williams, arrived at St. Ignatius on the morning of August 13 ready to tape the walls, lay down plastic floor protectors and start painting.

“The team from the Rye YMCA did more than brighten the walls of this little gem of a school in the Bronx,” remarked O’Driscoll. “They brightened the lives of our students through their act of kindness and generosity. It means a lot to this Hunts Point community that a group from the Rye Y would devote their personal time and effort, not to mention their awesome painting skills, into providing a helping hand. We witnessed how the Y fulfills its mission of bringing people together and are thrilled to have been part of the Togetherhood Project. We also owe a big thank you to Sherwin Williams and A.G. Williams for their generous contributions.”

In all, five teens and nine adults ranging in age from 14 to 64 would contribute 84 volunteer hours on the day of the project. Committee member Bill Blake had helped the two co-chairs organize the project and recruited family members, including his 14-year old daughter Hannah who documented the day through photographs and interviews. “It was a great experience,” Hannah observed. “I hope to do it again soon!”

Reflecting on Togetherhood’s first project, Reis concluded “I’m grateful to all the volunteers and business partners who helped make this event go so smoothly.”

For more information about the Rye Y’s Togetherhood program, contact Denise Woodin at