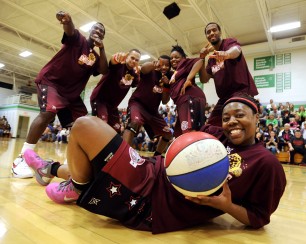 Tickets are on sale at the Rye YMCA front desk and ryeymca.brownpapertickets.com.

[Rye, March 3, 2014] Hoops and hijinks are coming to Mamaroneck on Sunday, March 30 when our very own local team, the Rye YMCA Centennials, challenge the Harlem Ambassadors in a comedy basketball show the whole family will enjoy. The show starts at 5:30 p.m. at the Mamaroneck High School Palmer Gym.

Proceeds from the event benefit Rye YMCA and will be used to ensure the Y’s powerful promise to the community that no one will be turned away due to an inability to pay.

The Harlem Ambassadors offer a unique brand of Harlem-style basketball, featuring high-flying slam dunks, dazzling ball-handling tricks, hilarious comedy routines, music, dancing and games for the kids.  “At our shows, we want the kids to know that they’re part of our team too,” Coach Ladè Majic said. “We invite as many kids as we can to come sit on the bench, have a front row seat during the show, and get involved in all of the fun stuff we do.”

The Harlem Ambassadors have performed more than 2,400 professional comedy basketball games as fundraising and community entertainment events for non-profit organizations, the U.S. military and community service groups since 1998. These events have helped raise over $9 million for communities in 50 states and 20 countries. The Ambassadors have appeared at Pearl Harbor, Bosnia, Kosovo, Sarejevo, Korea, Japan, the Marshall Islands, Guam, the Federated States of Micronesia, the Republic of Georgia, Mexico, Germany, England and Canada. Visit www.harlemambassadors.com to learn more about the company’s history and current tour.

“We’re proud to give communities quality family entertainment that parents, grandparents and kids can enjoy together and create memories that last a lifetime,” Harlem Ambassadors president Dale Moss said. “Every Harlem Ambassadors game is one-of-a-kind because the Ambassadors play against local competitors. It’s a night filled with laughter, comedy and slam dunks, all to benefit the local community.”

Tickets are on sale at the Rye YMCA front desk and ryeymca.brownpapertickets.com. For more information, contact margaretmead@ryeymca.org or call 914-967-6363.