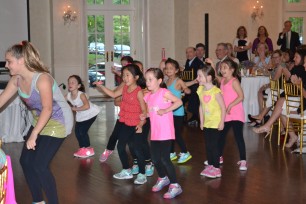 [May 26, 2016] Over 130 Rye YMCA supporters gathered at the Apawamis Club on May 25 for the organization’s Annual Dinner and awards ceremony. The event gave board members, staff and community residents the opportunity to celebrate the Y’s accomplishments and recognize the commitment of its volunteers. Three staff members were also honored with awards for excellence.

Although the speeches were applauded warmly, a group of children from the Y’s after school program stole the show. Led by 12-year-old Julie Halasz, ten 5-7 year-old girls delighted the crowd with a lively dance routine. Julie helped choreograph and teach the routine under the direction of her mother, beloved children’s performer Dawn Halasz, a.k.a. Dawny Dew.

In his remarks, Executive Director Gregg Howells spoke about the power of community partnerships. From the early days of Activate America—a coalition formed in 2005 to address obesity, inactivity and chronic disease—to our current work with Healthier Port Chester, Healthier Mamaroneck and Rye-ACT, our partners have played a vital part in the Y’s success. 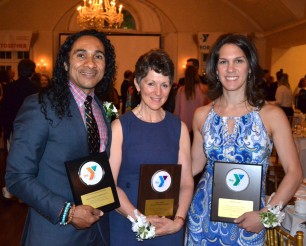 The following awards were presented:

Staff Award: Spirit, Mind and Body
This year’s recipient was Tanya Stack, Regional Coordinator for the YMCA’s Diabetes Prevention Program. Through leadership, dedication and tenacity, Tanya has helped develop a wide range of community health programs that serve our members and the community at large.

Staff Award: Quality Keeper
Staff member Sally Braid was honored for her work as a LIVESTRONG at the YMCA instructor and as a coach for the TRIBE, an all-women’s triathlon training group. Sally performs both of these roles with knowledge, professionalism, efficiency and compassion. 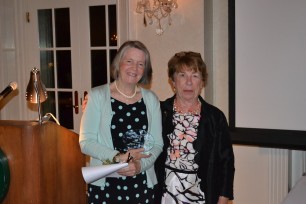 Community Service Award
Each year the Rye Y honors an individual who has made a positive impact on the community. This year’s award was presented by former board president and trustee Nancy Haneman to Sally Wright. A long-time resident of Rye, Sally has left her mark through her service to her children’s schools; as an active member of the Rye Chamber of Commerce, where she served three terms as president; and as a member of several City Committees. She helped bring Mistletoe Magic and the Farmer’s Market to downtown and brought parents, law enforcement and community advocates together to produce the Respect Manual.

For the past 20 years, Sally has led the Y’s development department. She has advanced the Y’s mission in measurable ways, allowing the Y to change lives every day. Sally is retiring this year and returning to her native Michigan. 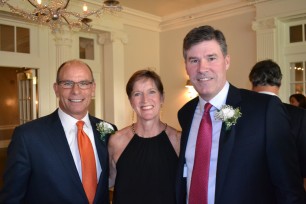