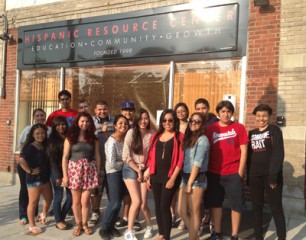 (RYE, May 20, 2013) The Rye YMCA and the Hispanic Resource Center (HRC) have teamed with a group of 18 outstanding high school students to launch a new Teen Leaders Club.

Through their own initiative, the teens drafted a complete charter and bi-laws for the newly formed Mamaroneck Leaders Club.  This week, the club voted in the new charter and conducted its first elections.  The club president, vice-president and secretary will serve during the 2013/2014 school year and lead the club through its inaugural year.

“The students will set their own year-long goals, the club’s vision for the next several years and their own recruiting strategy,” says Scott Umbel, club advisor.  “They will have many challenges ahead of them; however, I’m immensely impressed with their accomplishments so far.”

“Our HRC staff is excited to partner with the Rye Y once again,” remarked HRC’s Executive Director Zoe Colon.  “In the past, the Rye Y brought high quality fitness programs to the families we serve.  We’re looking forward to this new venture that focuses on developing leadership skills in highly motivated teens.

The Leaders Club is a self-governed group of high school students that will meet weekly with their advisors (Jirandy Martinez, Hispanic Resource Center and Scott Umbel, Rye YMCA).  The leaders are united under the common goal of building themselves and each other through teamwork and community service.  Volunteer activities might include mentoring and serving as workforce for the Hunger Task Force.

In addition to service hours, the leaders will gain personal skills through weekly “values” workshops that focus primarily on growing as a leader and as a young adult.  Jirandy Martinez shared that the values focus will “allow the leaders to address the multi-faceted needs of our community.”

The Leaders Club is one of the oldest and longest running teen programs within the YMCA movement, stemming from the early 1900’s.  For more information or to join the Leader’s Club, please contact the Jirandy Martinez at the Hispanic Resource Center or Scott Umbel at the Rye YMCA.  The club is open to any high school students and meets Tuesdays at 5:00pm at the Hispanic Resource Center in Mamaroneck.