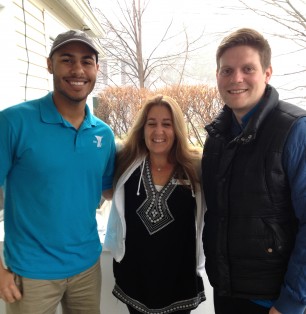 Rye YMCA programs for families, children and teens received a shot of adrenaline in 2015 with the addition of three new staff members who are bringing energy, passion and fresh ideas to the Y’s youth offerings. From the recently opened ExerZone to teen nights that are drawing up to 70 kids every month, the Y is giving families and children more options than ever.

Much of the new programming and activities are being led by John Rice, the Y’s Camp, Family and Teen Director; Kelly Lewin, Child Care Director; and Brendan Smith, Sports Coordinator.

“We’re lucky to have this dream team of dedicated professionals working at the Y,” remarked Hillary Southard, a Senior Director who oversees youth programming at the Rye Y. “John, Kelly and Brendan all bring a wide range of talent and experience to their jobs. Most importantly, they embody the mission of the Y, the belief that every child deserves a chance to thrive.”

A native of New Jersey, John Rice began his Y career as a 12-year-old volunteer in the Woodbury YMCA’s aquatics program. He went on to serve as a camp counselor, lifeguard, swim instructor and swim team coach. John graduated from Springfield College in Massachusetts with a B.S. in Youth Development with a concentration in YMCA Professional Studies. During college, he worked with YMCA afterschool and international programs. After graduation, John continued his career with the Y, serving most recently as a Teen and Camp Director in Philadelphia.

Under John’s leadership, the teen nights have become a popular monthly event, giving middle school students a safe, fun place to hang out with friends and enjoy games that go beyond the ordinary: Sumo wrestling, Capture the Medallion, Ultimate Skee Ball, Human Hungry Hippos, and Life Size Angry Bird, to name just a few. John has also developed enrichment programs for kids who shy away from athletic activities, including chess, origami, LEGO and cooking classes. And for teens who want to develop leadership skills and serve their community, John runs a Teen Leaders’ Club for middle and high school students. So far this year, the teens have packed groceries at the Larchmont Food Pantry, run Y activities for families and participated in development workshops.

After taking over the Y’s Child Care program in September, Kelly Lewin commented “The Rye Y has been a part of my life for years. My three boys were enrolled in camp here, took swimming lessons and went to teen nights.” Kelly began her Y career 15 years ago when she was hired as Assistant Childcare Director. She left reluctantly when her family relocated to Florida in 2001, but returned to the Y after moving back in 2010, working as a camp counselor and later as an assistant in the KinderTime and Afterschool programs. Raised in Mamaroneck, Kelly graduated from Rye Neck High School and received her School Aged Childcare Credential from Westchester Community College.

After three months on the job, Kelly has already enhanced the after school experience for children and families. In addition to homework help, arts, and visits to the new ExerZone, Kelly has incorporated STEAM (Science, Technology, Engineering, Art, Math) into the weekly activities. And she has strengthened the bond between parents, kids and staff by holding monthly potluck dinners. Understanding the importance of “spirit, mind and body,” Kelly is also giving the young students opportunities to build social and emotional skills. Looking ahead to summer, Kelly is excited about the Y’s Kinder Camp, which introduces young children to the camp experience.

A newcomer to the YMCA, Brendan Smith brings a range of experience to the roles of Sports Coordinator and Sports Camp Director. Before walking through the Rye Y’s doors this fall, Brendan worked as the part-time Operations Manager at Lake Isle Country Club in Eastchester and as an Account Manager for Madison Square Garden. Brendan’s enthusiasm for sports recreation is reflected in his work with the Town of Eastchester’s Recreation Department, where he ran the Eastchester Instructional Basketball League and teen night events. Brendan also worked as a Student Athlete Advisor for House of Sports in Ardsley, where he coached the Winter and Spring Break Sports Camps. Brendan holds a degree in Business Management from Fairfield University and has taken graduate courses in Sports Industry Management at Georgetown University.

Perhaps one of the best known of the Rye Y’s programs, the sports department involves hundreds of youth in team sports, trainings and vacation clubs. This fall, nearly 200 boys and girls are playing in the Saturday co-ed Youth Basketball League. On Sundays, girls take the court in a girls’ only league for basketball players aged 5-9. Young athletes will also have the opportunity to hone their skills during the Y’s Vacation Basketball Club for 5-11 year-old boys and girls. The club will be held from December 28-31 with half and full day options.

One of Brendan’s favorite parts of his new job is interacting with the kids, which he gets to do most directly through the school recess program. The Rye Y currently places Recess Coordinators in six local schools, where they keep students moving at recess through active recreation. The Recess Coordinators are also trained to recognize and prevent bullying. “I’m looking forward to summer camp,” Brendan added. “I had a lot of positive experiences when I was a camper years ago so I’m hoping to provide our Y campers with an equally positive experience.”

In a moment of reflection, John Rice observed “The cool thing about working at the Y is being part of transformational moments in the lives of others. From my early experiences helping a child who was petrified of the water become comfortable, to recent experiences giving staff the opportunity to grow, I have been blessed to be a part of the mission of the YMCA.”

For more information about the Rye YMCA’s youth programming, visit www.ryeymca.org for the Spring 2016 program guide, www.ryeycamp.org for the Summer 2016 Camp Guide, or contact Hillary Southard at 914-967-6363, ext. 103 or at hillary@ryeymca.org. Registration for spring programs begins January 13 for member and January 15 for non-members. Camp registration starts on January 6 for returning campers and their siblings and January 13 for everyone. Anyone interested in any of the Y’s programs and activities is welcome to stop by for a tour.