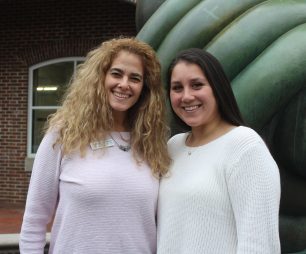 With over 20 years of experience between them, Liliana Gudino and Heather Camacho have cared for the Rye Y’s children in a variety of programs: Child Watch, Pre-school Enrichment, summer camp, and Afterschool Adventures. Both women have recently taken on new responsibilities that will allow them to grow professionally while continuing to nurture our youngest members.

Heather began her Y career in 2005 in the Child Watch room. Over the years, she helped with arts and crafts programs, worked as a summer camp counselor, and eventually became a head teacher with the Y’s licensed after school program.

Last December, she was promoted to Family, Camp and Teen Assistant Director, where she will lead the Y’s Pre-School Enrichment Program and oversee family and teen programming. Heather will also return to her role as director of Kinder Camp for a second year.

Even after 15 years, working with children never gets old. “They just bring so much joy into people’s lives,” Heather reflected. “Even if you’re having a bad day, they always have a smile when they come in and it just makes you have a better day.”

Liliana joined the Rye Y’s staff in 2014, the summer before she left for college. “I started as a counselor for the Explorers group and I loved it. It’s such a great age to make a positive impact because they’re looking up to you and that’s when you can truly say ‘oh, I’m trying to be a role model for these kids.’”

Camp was such a good experience for Liliana, and the Y, that she kept moving up—from counselor, to group leader, to village director, to Assistant Camp Director. Last June, she was appointed Child Care Director, which puts her in charge of After School Adventures. During the summer, she will continue to serve as Assistant Camp Director.

Both women love the continuum of care children receive at the Y, from being dropped off as babies in Child Watch to participating in teen programs, and everything in-between. They also agree that it’s the “team” that makes the Rye Y’s child care programs so special.

“Our team is very loving, very caring,” Heather said. “If you want to work in this field, you have to be child-like and relate to kids on their level. We want to be that consistent, loving, nurturing person for them.”