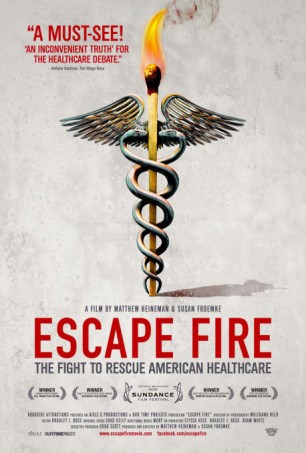 [Rye. April 3, 2013] The Rye YMCA and the Healthier Port Chester Coalition will sponsor a screening of “ESCAPE FIRE: The Fight to Rescue American Healthcare” on April 18, 2013, from 7:30 -9:30 p.m., at the Rye Free Reading Room.  ESCAPE FIRE is the award-winning Sundance documentary that has been hailed as “An Inconvenient Truth” for the healthcare debate.

ESCAPE FIRE tackles one of the most pressing issues of our time: how can we save our badly broken healthcare system?  The film examines the powerful forces maintaining the status quo, a medical industry designed for quick fixes rather than prevention and for profit-driven care rather than patient-driven care. ESCAPE FIRE follows dramatic human stories and leaders fighting to transform healthcare at the highest levels of medicine, industry, government, and even the US military.  ESCAPE FIRE is about finding a way out. It’s about saving the health of a nation.

This is not a film about political controversy or partisan posturing. It’s about creating a true healthcare system, not a disease-care system.  “I’m personally excited about the film because it addresses the fundamental flaws in the current system and offers ‘escape fires’ –or solutions — that are within our grasp,” remarked Rye Y Executive Director Gregg Howells.

The 90-minute screening, which is appropriate for ages 12+, will be followed by a panel discussion and Q & A with Dr. Daren Wu, Chief Medical Officer of Open Door Family Medical Center and Dr. Henri Roca, Medical Director of Greenwich Hospital’s Integrative Medicine Department.

###
The Rye YMCA is a family oriented community service organization which welcomes all people and promotes positive values through programs that build spirit, mind and body.

Healthier Port Chester is a broad-based coalition of community leaders working to make healthy living the easy choice for all.