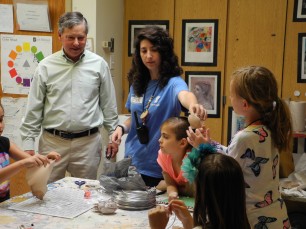 NYS Assemblyman Steve Otis visits with camp counselor Jennifer Cacciola and members of her group during a recent visit to the Rye Y’s summer camp.

During his visit, Otis saw several programs in action, including the Lego, Fine Arts, Sports and Discovery camps, which serves boys and girls from ages four to twelve.  Rice explained that the Y is always seeking ways to enrich the camp experience; two years ago, campers began earning beads for each achievement, last year, campers were given journals to write about their experiences and this year the Y partnered with the Rye Free Reading Room on a summer reading program.  These initiatives are designed to build confidence and stem summer learning loss.

After his visit, Otis remarked, “I really enjoyed seeing how engaged the staff and the kids were. The camp is so comprehensive; I was impressed at how each of the programs help children learn new skills and start the school year prepared.”

Rye Y summer camps serve 700 children each day from late June through late August. In addition to the camps located at Osborn School, the Y runs several camps out of its Locust Avenue facility, including KinderCamp, Gymnastics and Teen Fitness. And every day, the Y’s Adventure Camp takes tweens and teen on fun outings and community service projects around the region.