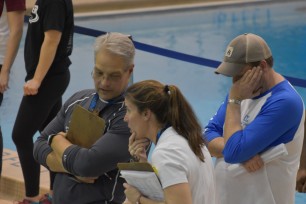 In addition, there were some outstanding individual achievements.  Ethan Zhou broke a 30-year-old record and is now a 3-time champion; Megan Tiedemann is 2-time champion and Mauve Bruton and Sofia Lord are new champions.  “Our swimmers had many best times and personal best swims,” said Coach Kate Tiedemann.  “I can’t wait to see what the next season brings!”

The goal of the Wave Ryeders program is to promote fun, camaraderie, new friendships, new skills, physical fitness and positive values that extend beyond the swimming environment. The Rye YMCA offers both a Spring and Fall swim team. The Spring swim team tryouts are April 12, 13 and 14 from 5:15-6:15 pm with practice running from April 18 to June 23.  Pre-team is also available for swimmers not yet ready for competition.

Please visit www.ryeymca.org and view the program guide (page 23) for details. Please contact Vickie Kourtelis, Aquatics Director at 914-967-6363, extension 107, for information on the swim team or any other aquatics program.