Rye Y Celebrates Centennial with “Party of the Century” 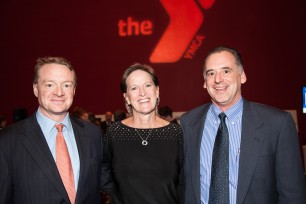 It was an evening of laughter, excitement and perhaps even a few tears of pride as the Rye YMCA celebrated its Centennial with a historic gala that was two years in the making. More than 350 Y members and friends attended the party at the Purchase College Performing Arts Center on Saturday, October 25.

“We’re thrilled that the event came together so beautifully and that everyone had a wonderful time,” commented former Rye Y board member Terry Tolley, who had stepped up to co-chair the gala. “The celebration tonight, and the countless hours it took to get here, represents the best of the Rye Y–our passion,our energy and our teamwork. I’m so grateful to everyone who helped make our Centennial year a resounding success.”

The Gold Spirit Awards, presented by Rye Y trustee Tom Murphy, are the Rye Y’s highest volunteer honor. Lucien Burnett is a former co-chair of the Rye Derby and served on the Y’s board of directors until 2004. He is currently a member of the Y’s board of trustees. He isalso a past board member of Clearpool, Inc., one of the first charter school programs focused on under-served districts in Bedford Stuyvesant and the Bronx, and a past board member of the Apawamis Club. He is now a board member for The Osborn and The Osborn Foundation in Rye.

Pati Holmes joined the Rye Y’s Board of Directors in 2004 and served on its Executive Board from 2007 to 2010. She also chaired the Board Development Committee and the Barefoot Bash, and served on Finance and Special Events Committees. Pati has also contributed her time and talents to the Rye City School District’s Curriculum Council and to Midland Elementary School as president of the PTO. She served on the board of the Rye Rangers Hockey Association and is a co-founder of the Heard in Rye Speakers’ Bureau. She currently volunteers for My Sister’s Place in White Plains where she is helping further the organization’s efforts to end domestic violence. 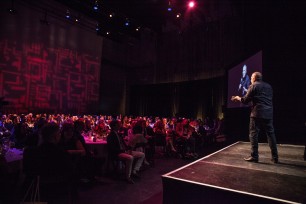 The evening was capped off by a 45-minute stand-up routine by actor, author and comedian Paul Reiser of “Mad About You” fame. After riffing about the strangeness of performing with his back to the auditorium, Reiser kept the crowd in stitches as he hilariously commented on aging, his family, technology and the difference between men and women.

The gala was not only a birthday celebration for the Rye Y, but also raised funds to support the organization’s financial assistance program (which last year awarded more than $625,000 in aid to our neighbors in need), community health work, and its centennial campaign to ensure the Y’s future. While the numbers are not yet finalized, Development Director Sally Wright indicated that the amount raised “exceeded our expectations.” “We’re extremely grateful to our sponsors, donors and guests,” she stated. Major sponsors for the event included Greenwich Hospital, Houlihan Lawrence, Julia B. Fee/Sotheby’s and Grasso Development. Wright also commended Tolley, her co-chair Mark Doran, and her staff: Margaret Mead, Lyell Lewis and Penny Cozza.

“This event was a home run in every possible way,” noted Gregg Howells. “It’s been a very exciting Centennial year. Even though it’s not over yet, we’re looking toward the future and it looks brighter than ever.”