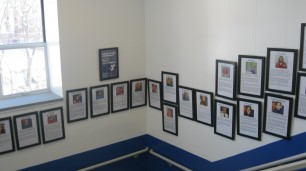 Rye, NY [February 6, 2014] The Rye Y is currently exhibiting the stories of 54 Rye Y members and staff as part of its 2nd annual “Voices from the Community: The Rye Y Story Project.”

The exhibit is the culmination of interviews held from November 12 to 14. Members, upon entering the lobby, were invited to share their Y story with a staff interviewer in a “story booth,” built out of a large gym mat. The exhibit reflects the diversity of the Y’s membership and the impact the Y has had on many of its members.

Modeled loosely on StoryCorps, a national oral history project, The Rye Y Story Project” was launched to further the sense of community that already exists at the Y.  Executive Director Gregg Howells remarked, “We were touched and gratified by the stories we heard during the Story Project.  It’s clear that the Y is so much more than gym or a childcare center; it’s a community hub where people share their hopes, their goals and their challenges, and where they support each other.” 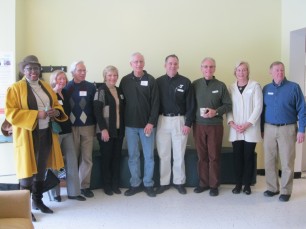 Rye Y Story Project participants gather at a reception at the Y.

Members are invited to share their stories with Y staff at any time. Stories may be about their current Y experience or a child’s experience at summer camp or other Y program. As part of its Centennial celebration, the Y is also seeking historical stories from members. For more information or to make an appointment, contact Lisa Tidball at lisatidball@ryeymca.org or 967-6363, ext. 130 or Denise Woodin at denisewoodin@ryeymca.org or 967-6363, ext. 101.