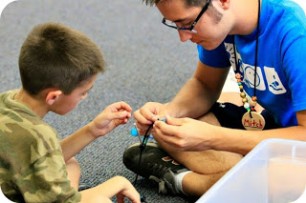 How often do we recognize the impact we have on others?

At the Y, we talk about impact a lot. We strive to create programs and activities that will make a difference in our members’ lives. We form partnerships with public officials, parents of school-aged children and business leaders to make a positive impact on our community. Through our actions, our smiles, our engagement with each other, our staff, members and volunteers impact each other in countless ways.

When I think about impact, I often think about an incident that happened to me several years ago. One night, as I was taking the express train from Northern Manhattan downtown, I noticed an unkempt, obviously mentally ill woman pacing the nearly empty car.Standing near the door, I watched her nervously as she circled closer and closer to me, muttering angrily. My anxiety turned to fear as she seemed to glare at me and started talking about killing “the white woman”and stabbing her (me) to death. Was that a knife in her pocket? With the long stretches between express stops, I couldn’t escape.

A young man and his girlfriend were sitting on one of the benches in the middle of the car, quietly watching me. He motioned for me to come over. Afraid to move, I shook my head. He persisted, silently encouraging me to come over to him. When I did move across the car, he stood up, giving me his seat and placed his body between me and the raging woman. I felt safe. At the next stop, I got off as did the young man and woman.

I can’t think of that story without emotion. That man, wherever he is today, probably has no idea how much of an impact he made on me through his kindness. He could have ignored me, but he didn’t. Most of our stories of impact are not so dramatic. They don’t often involve danger. However, every thoughtful act, every hug when someone else needs one, every kind word or patient response makes an impact. Like that young man, we may never know how we affect others.

Prior to a recent staff meeting, the Y’s Chief Operating Officer Eileen Barber asked us to write down one way that we had made an impact on a member or colleague in the previous six weeks. At first, it was hard for me to come up with a story. After all, I sit at my computer most of the day. How was I making an impact? But I, and everyone else on our team came up with a story. And as we read them out loud, it became clear that we all make an impact every day.